Besides the fact that crude oil is back above $70, what’s even more impressive is how it has gotten there.  In the process of breaking out above its February highs a couple of weeks back, the intraday high in WTI has been higher than the prior day’s intraday high for 14 straight trading days.

That type of persistent intraday bid in crude oil has been unprecedented.  Going back to 1983, the current streak ranks as the longest on record surpassing the prior record of 12 trading days that was reached in both 2003 and then again in 2011.  In the near 40 years since 1983, there have only been six other periods where WTI even saw a streak of ten trading days where its intraday high was higher than the day before.  Click here to view Bespoke’s premium membership options. 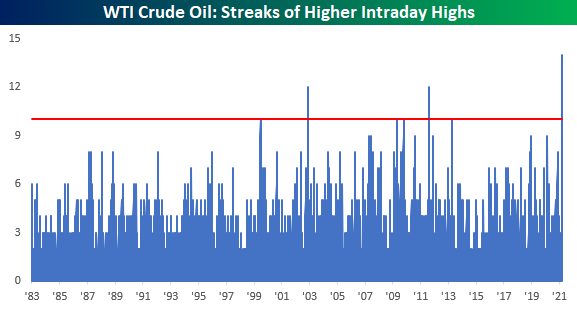