It has been a slow crawl, but as the economy has begun to reopen travelers are slowly beginning to take to the skies again.  Although TSA Total Traveler Throughput is still down 83.47% from last year, it has made headway over the past several weeks. Daily total throughput has averaged 361K over the past week compared to its worst day in mid-April when throughput was down over 96% YoY, averaging around just 95K travelers per day. In other words, air traffic has been improving but is far from out of the woods and still down significantly from last year. 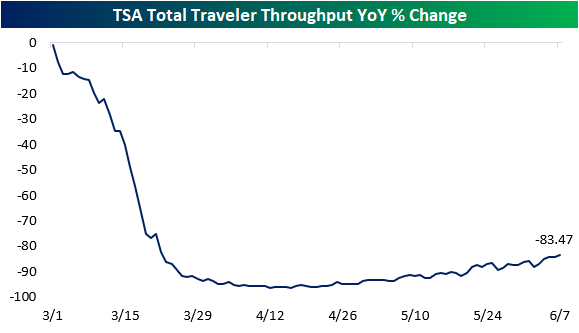 That small improvement in addition to drastic underperformance earlier this spring has acted as the catalyst for massive buying into the sector. One ETF that has served as a proxy for airlines recently has been the US Global Jets ETF (JETS) which tracks airline industry-related stocks from around the globe. From its high on February 12th to its low on March 19th (both prior to the broader market’s respective high and low) JETS had fallen over 61%.  After trending sideways for a bit and successfully retesting those lows, JETS has ripped higher.  As of today, it is up over 75% from its recent 5/13 low.

With such a massive gain in less than a month, it has left its 50-DMA far in the rearview sitting 46.9% above its 50-day (though it is still 16.5% below its 200-DMA). That also means JETS is now at its most overbought levels ever since it first began trading in 2015 (second chart below).  Tacking on another 6.4% gain today, JETS is trading 3.6 standard deviations above its 50-DMA. Prior to this run, the most overbought JETS ever became was 3.06 standard deviations above its 50-DMA in 2016. 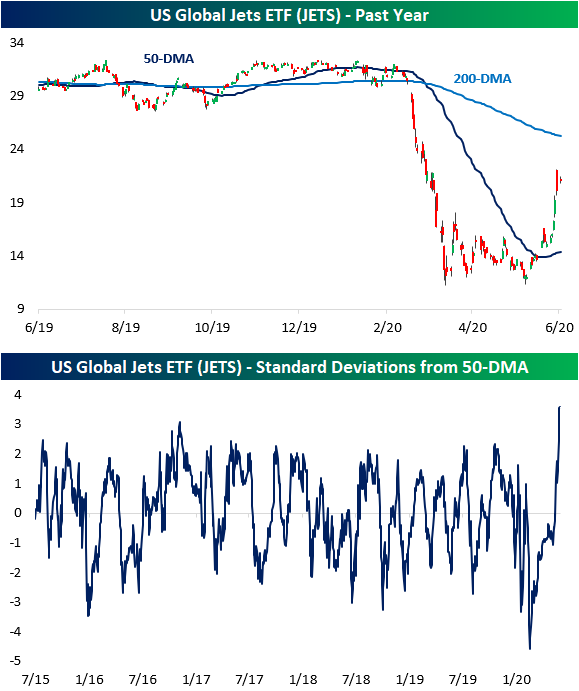 As for the individual US airlines, it is broadly the same story. The surge in buying over the past few weeks has left those S&P 1500 stocks in the airlines industry up 60% or more since 3/23. United (UAL) and American Airlines (AAL) have gained the most with both stocks up over 100% since 5/13. As with JETS, these names are all extremely overbought now with all but three airlines (Hawaiian- HA, Allegiant- ALGT, and Southwest LUV) more than 3 standard deviations above their 50-DMAs.  That is around some of the most overbought levels of the past decade as shown in the table below.  Click here to view Bespoke’s premium membership options for our best research available.