High Correlation Between Stocks and Bonds

So far in 2022, stocks and bonds have both sold off, leading investors with a balanced portfolio to experience historically painful drawdowns. Rates have risen, and partially because of this fact, equities have had a tough year. The S&P 500 ETF (SPY) is down 16.0% on a YTD basis, while the iShares Core US Aggregate Bond ETF (AGG) has shed 11.3% of its value. Typically, rates fall alongside equities, as investors shift their capital allocations to safer assets. 2022 has been different, though, and has seen selling in both bonds and equities.  This has resulted in a historic level of positive correlation between the ETFs SPY and AGG going back to 2004 when AGG first started trading.  Click here to start a two-week trial to Bespoke Premium and receive our paid content in real-time.

Although the 200-day correlation between stocks (SPY) and bonds (AGG) has been higher once before (in late 2009), the current level remains particularly elevated. The current 200-day correlation sits at 0.87, which signifies a strong positive relationship. In the last 200 days, stocks have moved in the opposite direction of rates on most days, as the market is incredibly focused on the bond market as the Fed transitions from an accommodative to a restrictive stance in the face of higher inflation. Interestingly, the correlation coefficient does appear to be rolling over, moving lower in each of the last 15 trading sessions. Historically speaking, the correlation coefficient has tended to turn negative not long after rolling over, as illustrated by the chart below. 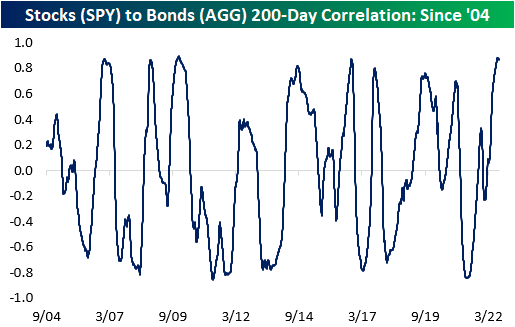 The more we zoom in, the more the rollover becomes clear. The higher frequency measures, such as the 100 and 50-day correlation coefficients, have already moved substantially off of their recent highs, even though they are still elevated relative to history. The 100-day correlation coefficient is now at just 0.70, while the 50-day coefficient is even lower at 0.55, the lowest levels since mid-June and mid-May, respectively. This tells us that the 200-day correlation will likely pull back further, thus giving SPY a chance to gain even as rates rise, and visa-versa. As evidence of this, today SPY is down over 125 basis points even as AGG is up six bps, moving in opposite directions. To make a long story short, bonds and stocks may begin to diverge in terms of performance as the correlation between the two assets begins to roll over. Now you just have to figure out which direction they’ll each go!  Click here to start a two-week trial to Bespoke Premium and receive our paid content in real-time. 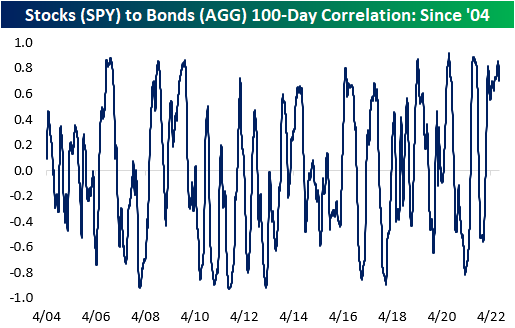 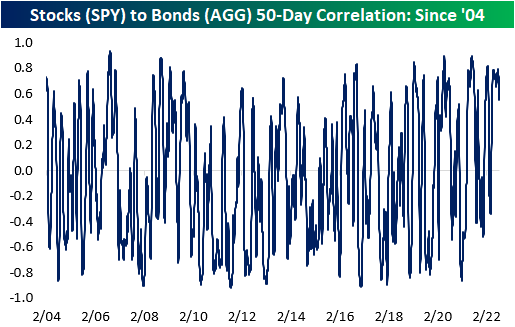 The rolling 100-day correlation between stocks and bonds has been over 0.5 (or 50%) for 129 trading days, which is the longest streak since the inception of AGG by a considerable margin. Although the coefficient is declining, the 100-day correlation would need to drop another 0.2 points for this streak to end.  Click here to start a two-week trial to Bespoke Premium and receive our paid content in real-time. 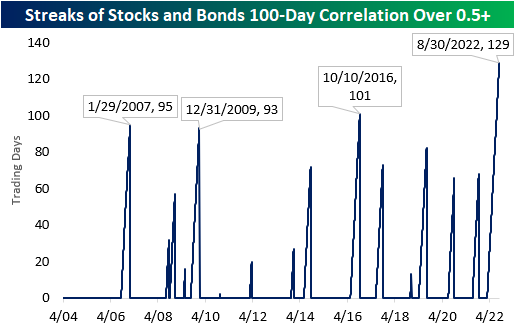