After trading in a rather tight range over the last few months, the Health Care sector’s chart has taken some dramatic turns in the last few weeks.  Just earlier this month, as Elizabeth Warren’s poll numbers were surging, Health Care appeared to be on the verge of breaking down as its price broke below both the 50 and 200-day moving average as well as the summer lows.  Just as the sector looked to be on its deathbed, though, it has seen a dramatic recovery to the point where it is now testing its 2019 highs! It should come as no surprise that the recent rally has coincided with what has recently been a decline in Warren’s poll numbers, but positive earnings results from high profile names in the sector have also helped. 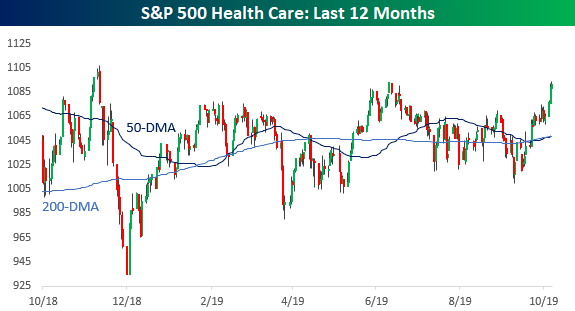 Recent readings for the sector reflect the major shift that the sector has seen in the last four weeks.  As recently as October 2nd, the Health Care sector was in extreme oversold territory, trading more than two standard deviations below its 50-day moving average.  In the span of fewer than four weeks, the sector has gone from extreme oversold to extreme overbought, which is the type of reversal you don’t see very often.  In fact, going back to 1980, it has only happened in eight prior periods with the most recent occurring all the way back in July 2016 just after the original Brexit vote.

When a sector reaches extreme overbought levels, it usually indicates that it is due for a pause to work off the overbought condition.  In order to work off the overbought condition, the sector could either experience a pullback in price or a period of sideways trading so that the sector’s moving averages can catch up to the current price.  These pauses and pullbacks don’t always start exactly when the sector reaches overbought levels, though.  In fact, back in July 2016 when the sector last saw a similar reversal, Health Care kept rallying after its sharp positive reversal gaining 1.2% over the following week and 3.1% over the next month. Start a two-week free trial to Bespoke Institutional to access our interactive tools, including the Trend Analyzer and Earnings Explorer. 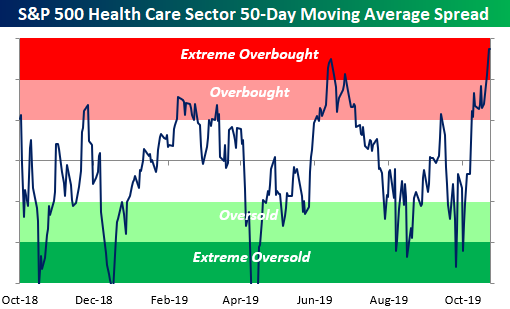