Time is ticking for 2019 with just 23 trading days left until the New Year. Performance has been strong this year with just about every sector seeing double-digit gains with Technology (XLK) being the strongest performer; having risen better than 40% YTD as shown below. While tech has stood out with its outperformance, two other sectors have lagged a bit this year. Energy (XLE) is perhaps the most notable underperformer but Health Care (XLV) is the second worst-performing sector in 2019. But more recently, this is by no means the case. 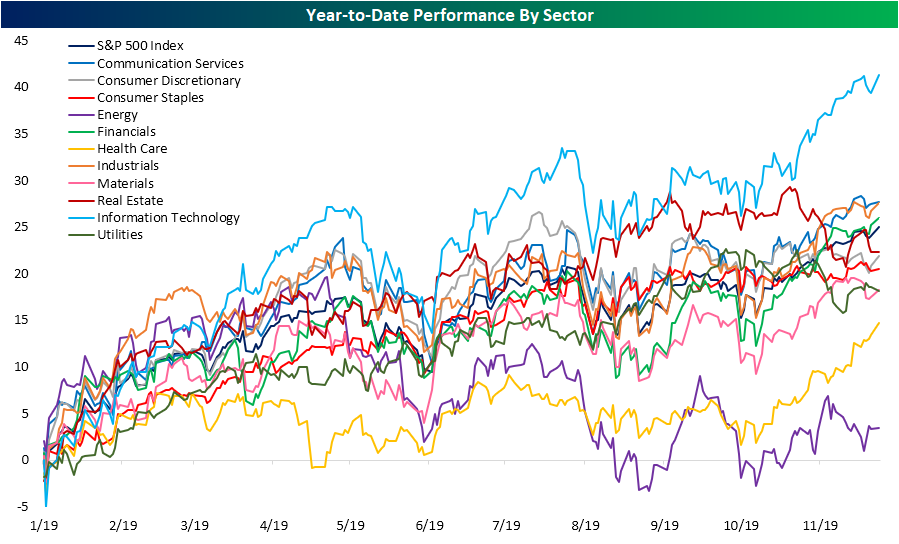 Since the S&P 500 broke back out to new all-time highs on October 28th, the Health Care sector has risen 6.68%.  That is 2.5 percentage points better than the next best-performing sectors: Technology and Financials. While Health Care has led the way higher as the market reaches record highs, it has also gotten pretty extended.  Now at 52-week highs, it is extremely overbought at more than two standard deviations above its 50-DMA.  In percentage terms, yesterday’s close left the sector over 7% above its 50-DMA.  No other sector is this overbought. 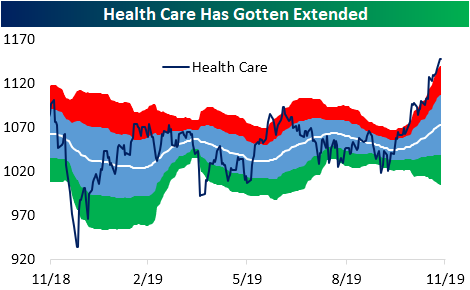 While this typically defensive sector has gotten overbought, other defensives (Real Estate and Utilities) have sold off given the more positive risk appetite as the broader market has reached new highs. Since the October 28th breakout for the S&P, the average performance for defensives (Real Estate, Health Care, Utilities, and Consumer Staples) is just +0.84% while cyclicals (the other 7 sectors) have averaged a 2.58% gain. With regards to defensives, 2019 has actually been a solid year with both Real Estate (XLRE) and Utilities (XLU) having traded in solid uptrends up until recently as shown below. In fact, up until only a few months ago, Real Estate (XLRE) had the second-best performance YTD of all 11 sectors.  But the recent moves have broken their uptrends and left them trading in oversold territory for much of the past month. Neither one has traded above their respective 50-DMAs since the first few days of November. Sign up for Bespoke’s “2020” special and get our upcoming Bespoke Report 2020 Market Outlook and Investor Toolkit.