Health Care Gets No Booster Shot From Sanders

Bernie Sanders dropped out of the Presidential race today, and while his chances of ever securing the nomination were slim to none, his dropping out does reduce a small amount of uncertainty.  The chart below illustrates this trend as the Vermont Senator’s odds to win have dropped dramatically since Super Tuesday. 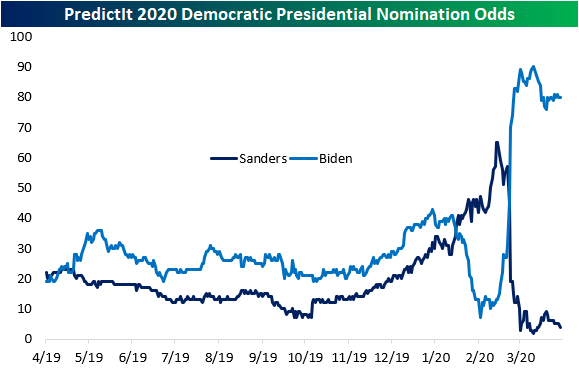 As we have noted in the past, the odds of winning for the more progressive candidates on the Democratic ticket have typically had an inverse relationship to the Health Care sector’s performance because their policies are more likely to shake up the business model of companies in this sector. Despite that relationship, Health Care stocks saw little in the way of a boost from Sanders dropping out of the race.  There wasn’t a single point in the trading day today where Health Care was the top-performing sector in the S&P 500, although its performance relative to the S&P 500 did pick up slightly in the afternoon after the Sanders announcement.  Start a two-week free trial to Bespoke Institutional to access all of our research and interactive tools.