Stocks experienced an impressive rebound today with the S&P 500 up around 4.25%.  One of the best performing sectors today was Health Care which gained 5.76%. Performance has been even more impressive for the Health Care Providers and Services industry which was up over 12%. The major catalyst has been Joe Biden’s strong performance on Super Tuesday placing him as the front runner for the Democratic ticket.  Betting markets (ElectionBettingOdds.com) now give the former Vice President an 83% chance of being Trump’s challenger come November as shown in the chart below.  Over the past year, no Democratic candidate has been given this much certainty to win the nomination. Biden’s surge in the past couple of days has borrowed from not only those who have dropped out of the race like Bloomberg, but also from more progressive candidates like Bernie Sanders and Elizabeth Warren. With those more progressive candidates who threaten to shake up the Health Care space on the decline, Health Care stocks have had reason to run. Today’s response by these stocks to Sander’s decline in the polls is perhaps a more dramatic version of the same dynamic as we saw in late 2019 during Senator Warren’s rise and subsequent fall as the Democratic favorite.  Start a two-week free trial to Bespoke Institutional to access our interactive tools and full range of research. 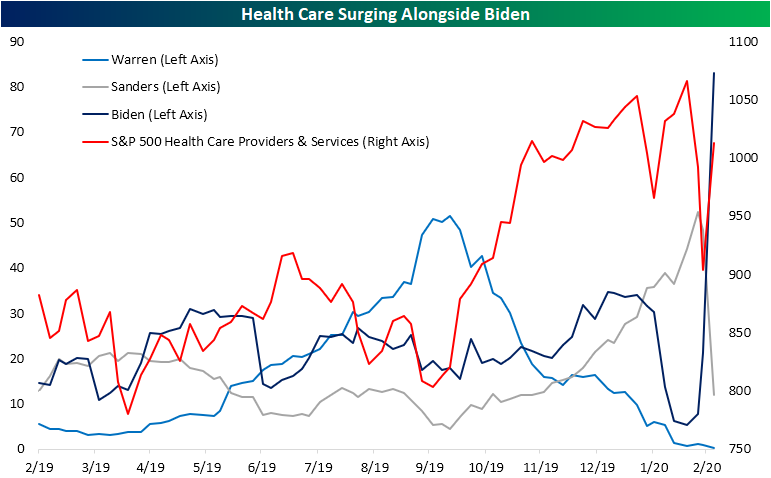