Today’s ISM report pointed to broad improvements in the manufacturing sector in November, albeit there were some slowdowns in areas like New Orders, Production, and worst of all Employment.  The index for Employment saw the sharpest decline falling 4.8 points from an expansionary reading of 53.2 in October to a contractionary 48.4 in November.  That decline was in the bottom 5% of all month over month changes. Taking a more granular look, 18.9% of companies reported a lower number of workers (compared to 17.7% last month) whereas 14.8% reported a higher number (23.1% in October). 66.4% reported no change in the number of employees, up from 59.3% last month.

That reading at face value may be a bit of a worrying sign as it points to more companies reporting lower rather than higher headcounts. That also goes counter to other parts of the ISM report which pointed to further growth in demand and production.  Some explanation can be found at least anecdotally through the comments section though. As shown below, rather than firms mentioning that they are laying off workers, the verbiage more often points to troubles in hiring.  For example, there are mentions of “labor shortages” as “finding new people is an issue”.  Put differently, there is anecdotal evidence that the manufacturing labor market is facing a supply instead of a demand issue. As a result of these shortages, firms report that there have been production constraints while demand has been strong.  Click here to view Bespoke’s premium membership options for our best research available. 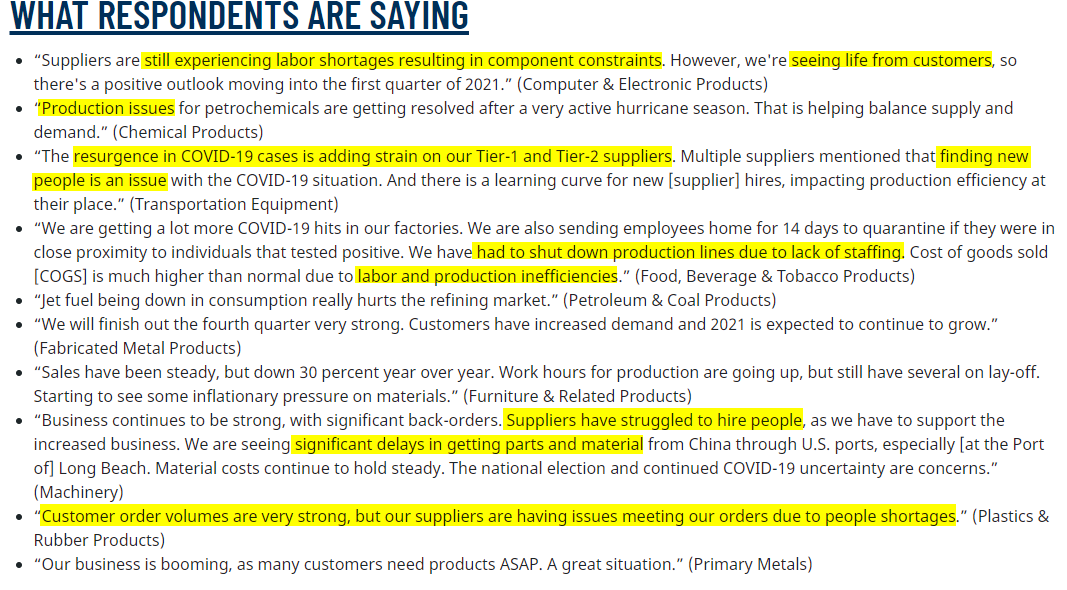