Hard to Hate This Week’s Claims

Among the many strong economic data points out this morning, jobless claims was one of the more impressive ones. Last week’s print was revised upwards to 769K from 744K. This week’s number was anticipated to fall back down to 700K, but the actual results were far better as seasonally adjusted initial claims fell by 193K to a pandemic low of 576K. That is the biggest one-week drop since a 219K decline at the end of July.  Additionally, this week’s decline also brings claims back below the pre-COVID record high of 695K from October 1982. 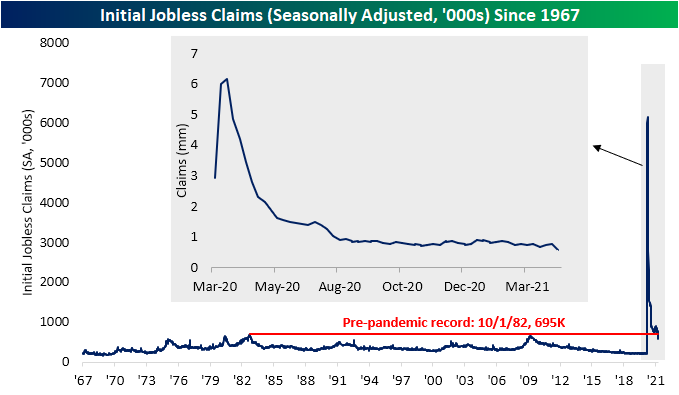 On a non-seasonally adjusted basis, the picture was just as impressive.  Regular state claims dropped 152.9K to 612.9K. Again this was the lowest level of the pandemic.  The same can be said for Pandemic Unemployment Assistance (PUA) too. Although the 20K decline is on the smaller side for the past several weeks’ moves, claims from this program reached a new low of 131.98K.  PUA claims are now down to around a quarter of where they stood just two months ago. 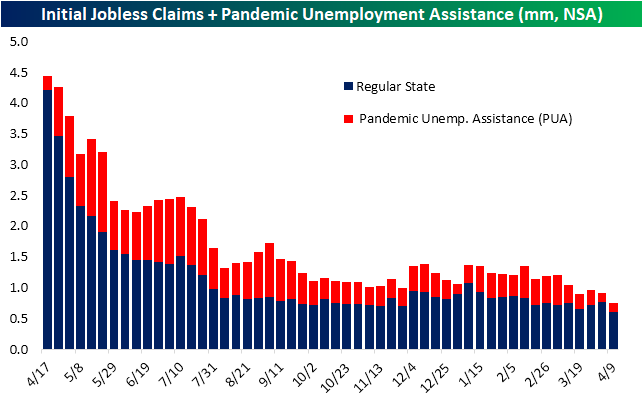 Over the past several months, continuing claims have consistently been making new lows for the pandemic.  Since the high in claims last May, there have only been 8 weeks in which continuing claims did not fall with this week being one of them.  Claims rose by a meager 4K from last week’s downwardly revised reading of 3.727 million.  That snapped a streak of 12 consecutive weeks of declines. Additionally, outside of the week of September 11th when claims went unchanged, the 4K increase this week was tiny relative to other moves of the past year. Overall, while continuing claims increased, it came in the context of a long, albeit slowing, streak of declines. 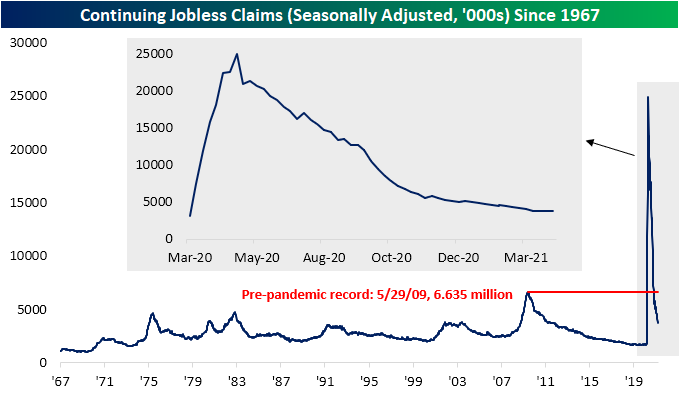 Including all other programs creates another week’s lag for the data meaning the most recent reading is through the final week of March. Taking a look at continuing claims in this light, there were broad improvements with the only program to see an uptick being the very small State Additional Benefits which rose from 1.8K to 2.15K.  As for the larger and more impactful programs, regular state claims fell by half of a million while PUA claims were not far behind dropping 474.7K.  The third-largest program, Pandemic Emergency Unemployment Compensation (PEU), also saw a significant decline falling by 174.4K.  That was the program’s fourth-largest week-over-week decline of the past year.  Altogether, total continuing claims across all programs fell to 16.96 million. That is the second-lowest level of the past year.

In addition to the drop in the overall level of claims, another improvement comes from the composition of claims. Over the past several months we have noted how an increased share of claims are on account of programs that extend benefits past the expiration of various programs. In other words, a larger share of people on unemployment have been out of work for extended periods of time. For the time being, that trend has peaked. The most recent week showed further improvements with respect to those programs as they now account for a combined 34% of all claims. That is down for a third week in a row since the high of 36.9%. Click here to view Bespoke’s premium membership options for our best research available. 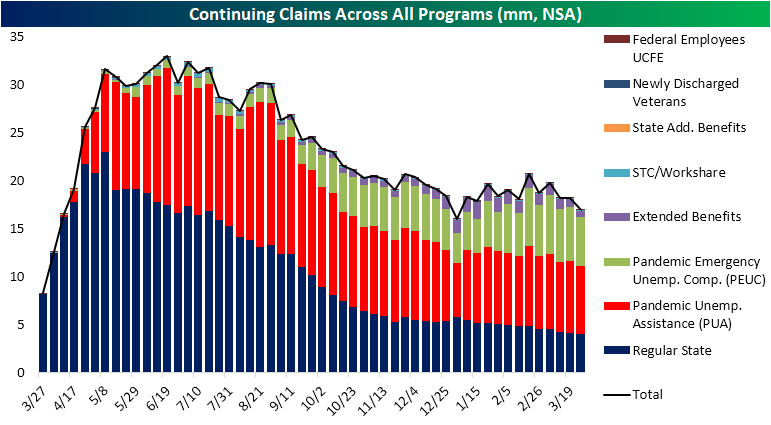 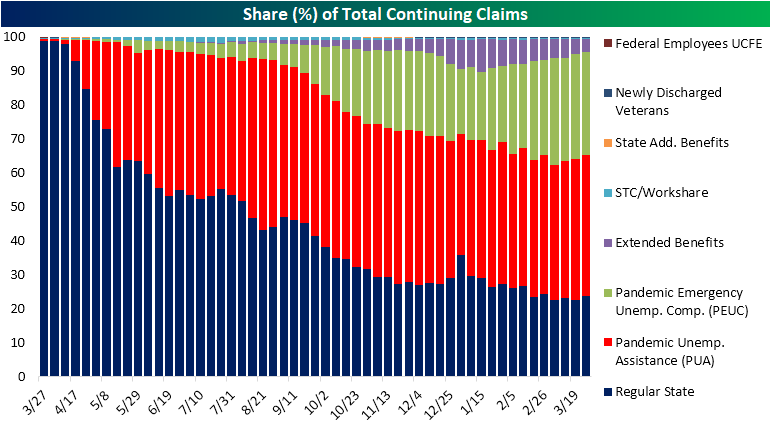