Guns Still Flying Off the Shelves

The latest data on firearm checks from the FBI for the month of February showed that while gun sales eased off from January’s record pace, by all accounts, the pace of gun sales is unlike anything seen prior to 2020.  With a total of 3.44 million background checks during the month, February’s pace was down 20% versus January’s record pace.  Even with the decline, though, February saw more background checks than all but six other months since 2000, and all of those six months were in the last twelve. For the month of February alone, background checks this year were higher than any other February on record by a margin of over 600K.

On a y/y basis, background checks were up over 22%, and while that’s a significant increase, it actually represents the lowest y/y increase since December 2019.  Again, 2020 was a year unlike any other in the last twenty years in terms of Americans looking to buy guns.

With sales still near historically high levels but clearly slowing from the torrid pace of growth in 2020, the stocks of gun manufacturers (SWBI and RGR) have been in a bit of a holding pattern. Both stocks peaked in the middle of last year as protests and riots exploded around the country.  They started to rally again after the election right up through early January.  Interestingly, the closing high of the post-election rally in both stocks ended on the same day as the Capitol riots on 1/6, and since then both stocks have been drifting back into the ranges they traded in during the second half of 2020.  For full access to our research and market commentary, start a two-week trial to our Bespoke Premium service. 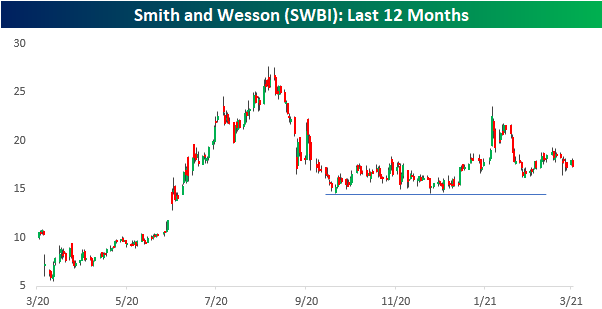 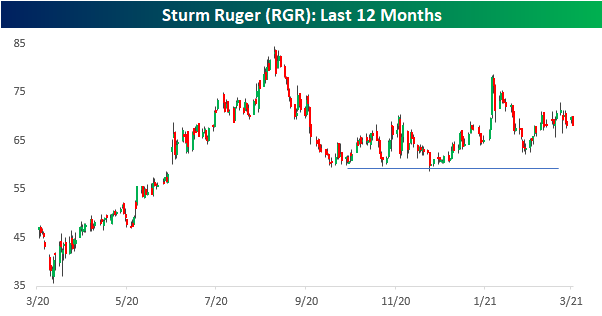