At first glance, the chart below looks a bit like a tally of COVID case counts, but what it really shows is the number of NICS background checks taking place for the purchase of firearms.  In the month of June alone, there were 3.93 million background checks which represents slightly more than 1% of the entire US population.  Historically, the pattern of background checks follows a saw-tooth pattern hitting their annual highs towards the end of the year, but after hitting a new record high back in March, background checks hit another record high in June.  It’s not often that you see that.  They say that gun sales increase during periods of uncertainty, and whatever your views are towards the shutdowns or the protests that have erupted all over the country, we can all agree that they have generated enormous amounts of uncertainty. 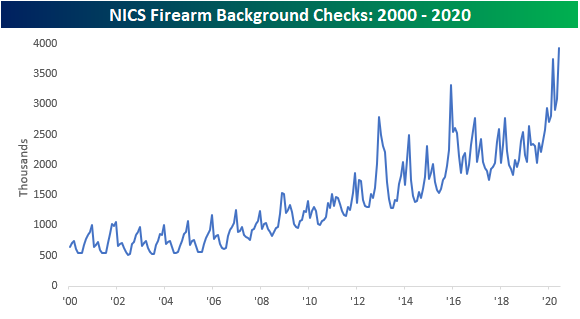 Besides the instability that has blanketed the country, the decline in President Trump’s poll numbers may also be fueling a rush to buy guns.  If Biden were to win in November and the Democrats take control of the Senate, the odds of legislation curbing at least some types of gun sales would only increase.  Historically, there is a precedent for this.  Back in 2008, when President Obama was elected, the y/y pace of background checks surged at what was a record y/y pace to record highs.  When Obama was re-elected, the pace of background checks surged again, increasing at a y/y pace of over 80% at the start of his second term. 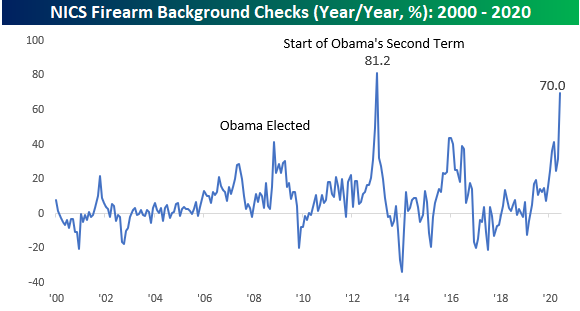 With Americans in a rush to buy guns, the two publicly traded gun manufacturers have been on fire.  The charts below show the performance of Sturm Ruger (RGR) and Smith and Wesson (SWBI) over the last year.  In the case of both stocks, they have doubled off the lows.  While financial markets hate uncertainty, these two stocks can’t get enough of it. Click here to view Bespoke’s premium membership options for our best research available. 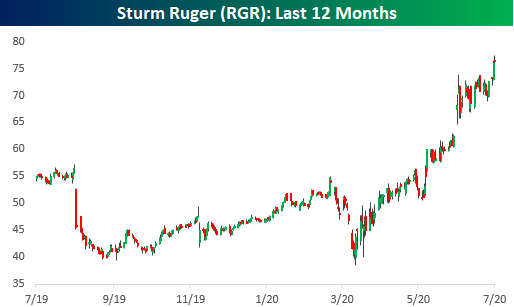 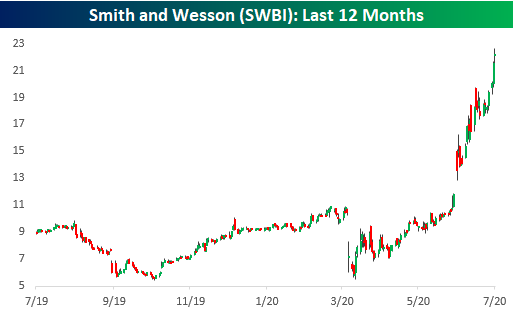