FBI Background checks for the month of May were just recently disclosed, and just as many aspects of the economy and overall society are starting to return back to more normal levels following the disruptions caused by COVID, so too are gun sales based on the latest data.  For the month of May, background checks fell from 3.51 million down to 3.22 million which is the lowest monthly reading since last September.

While the m/m decline in background checks wasn’t particularly extreme, the two-month rate of decline was the largest ever, falling by nearly 1.5 million.

While the pace of gun background checks has been declining, the prices of gun stocks have actually been on the rise.  Below we show the one-year price charts of Sturm Ruger (RGR) and Smith and Wesson (SWBI) which are the two publicly traded pure-play gun manufacturers. Both stocks surged late last spring and into the early summer following the George Floyd killing and subsequent protests and riots across the country, but they quickly pulled back in the summer months and traded relatively rangebound over the following six months.  Since late April, though, both stocks have started to attract investor interest, and RGR is actually close to 52-week highs while SWBI is close to taking out its high from early this year.  Click here to view Bespoke’s premium membership options. 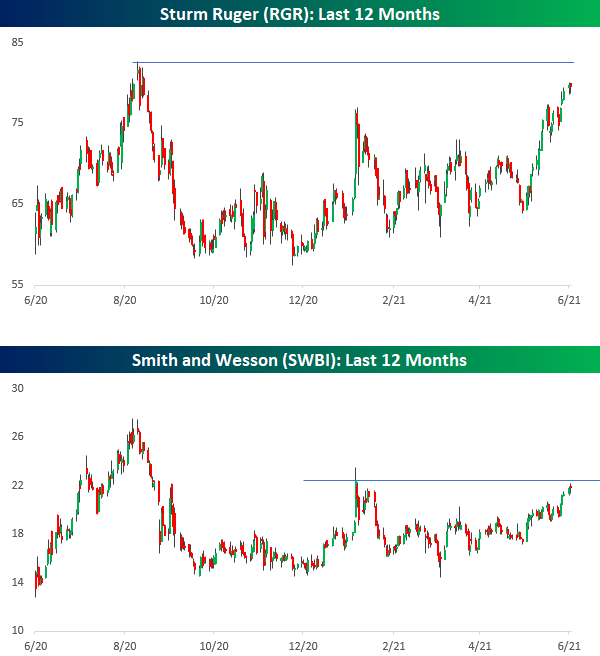