In a sign that overall levels of anxiety across the United States may be receding, the pace of background checks for the purchase of firearms has come crashing down from record-high levels.  From a peak of 4.69 million in March, background checks fell to 2.72 million in August.   That level is still the second-highest total for the month of August on record, but after a steady surge with the onset of COVID and the riots across the country last summer, there has been a sharp decline in total checks over the last few months.

On a y/y basis, background checks have really swung from one extreme to the other.  From last July to this June, total background checks experienced a 100 percentage point peak to trough swing falling from 79.2% down to a decline of 22.3%.  Over the last two months, the rate of decline has gotten less bad, but it is still at negative 12.8%.

You might surmise that such a large decline in background checks wouldn’t be good for the stocks of gun manufacturers, and you’d be partly right.  Below we show one-year charts of Sturm Ruger (RGR) and Smith and Wesson (SWBI).  While both stocks are down significantly from their 52-week highs, they’re also far from 52-week lows.  In the case of RGR, stock has pulled back from its 52-week high back in July, but for the time being it has generally held above the top end of its prior trading range from earlier this year.  In the case of SWBI, the stock really surged back in late June following a strong earnings report but has been quick to give back all of its gains.  Despite the large drop, though, it is still trading at higher levels now than it was in the first quarter of the year when levels of background checks were at record highs. Click here to view Bespoke’s premium membership options. 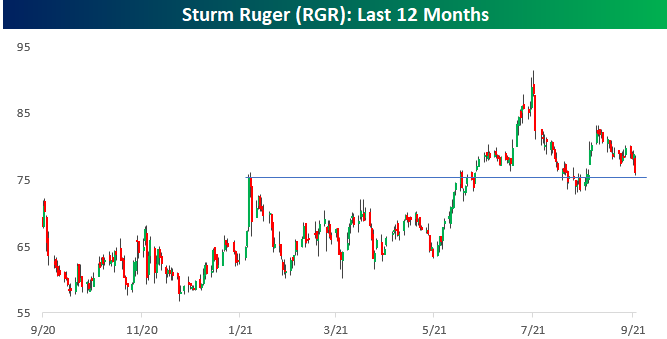 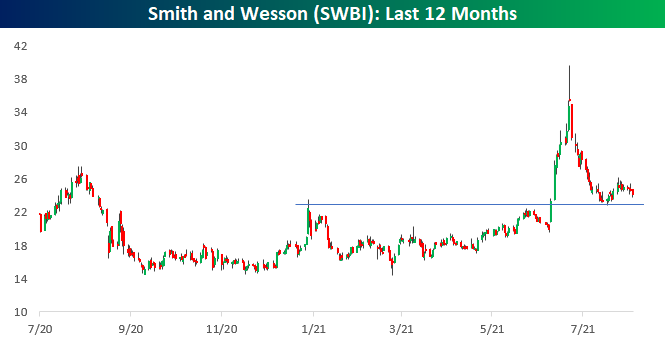