While background checks for the purchase of firearms may not be the most obvious example of an economic indicator, we find that they are worth watching as a gauge of sentiment.  For example, if you see a sudden sharp increase in the number of background checks, it could be a signal of increased uncertainty on the part of Americans.  After all, when things are going smoothly in the economy and society, people probably don’t feel the need to go out and buy a gun.  A perfect case in point is last year during the early days of the pandemic in the Spring.  In January 2020, right before COVID, there were 2.7 million background checks for the purchase of firearms.  By March, even with most of the economy locked down, background checks surged 37% to 3.7 million.  After that initial COVID surge, background checks dropped off a bit but then rebounded throughout the summer as protests flared up across the country.  Then, after President Biden was elected and Democrats gained control of the House and the Senate, there was one last surge to a peak of 4.69 million in March 2021.

From that peak in March 2021, background checks have plunged over the last six months to a pre-COVID level of 2.63 million.  Not only that, but with six straight months of declines, there has only been one other period in the last 20 years where background checks declined for as many consecutive months.  That was back in June 2013 just after President Obama was re-elected.  Since Democrats are traditionally more anti-gun than Republicans, any time they do well in elections, it creates a short-term surge in people looking to buy firearms in order to get ahead of any potential anti-gun legislation.

While a drop in firearm purchases suggests an easing level of uncertainty on the part of Americans, it’s obviously not good for the manufacturers of firearms.  As shown in the charts below, both stocks are well off their recent highs and are currently testing support levels.  Smith and Wesson (SWBI) has actually nearly been cut in half from its highs in the Summer, and while Sturm Ruger (RGR) has held up much better, it is still down 20% from its high.  Read Bespoke’s most actionable market research by joining Bespoke Premium today!  Get started here. 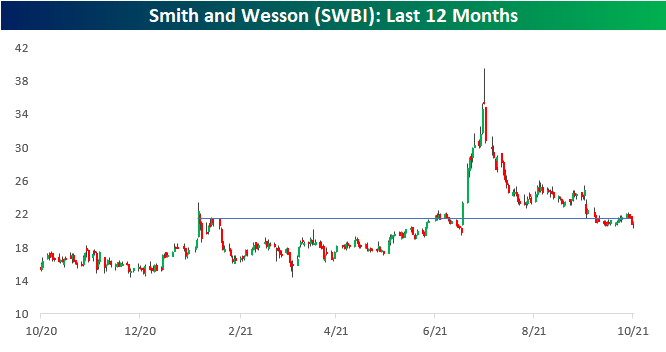 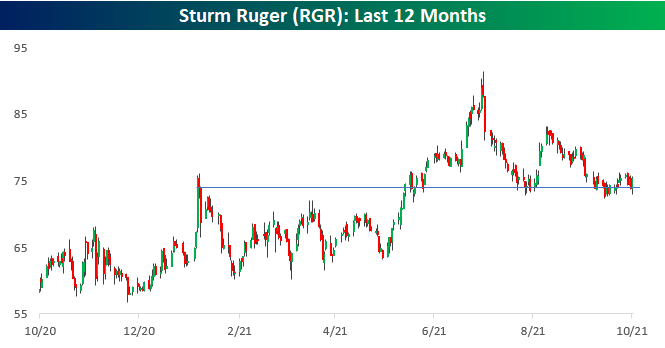