As COVID becomes endemic, levels of anxiety across the country have been declining. At the beginning of the pandemic, uncertainty in the political climate caused by riots and pandemic-related restrictions pushed Americans to rush to their local sporting stores to purchase firearms, resulting in a y/y percent increase in background checks that was second only to the spike seen after Obama’s second term began. In July 2020, FBI background checks spiked by 79.2% y/y, just two percentage points less than the increase seen in January of 2013. However, the absolute number of checks in July of 2020 was 1.14 million higher than the figure from January 2013 (3.64 million vs 2.50 million). In March 2021, background checks topped out at 4.69 million, the highest monthly figure on record. The number of background checks has somewhat normalized since then, resulting in just 2.55 million checks being run in February, albeit a slightly shorter month. Click here to view Bespoke’s premium membership options. 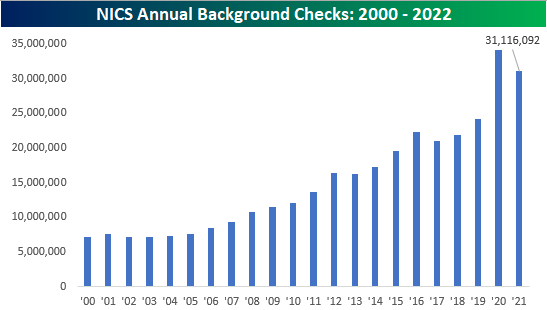 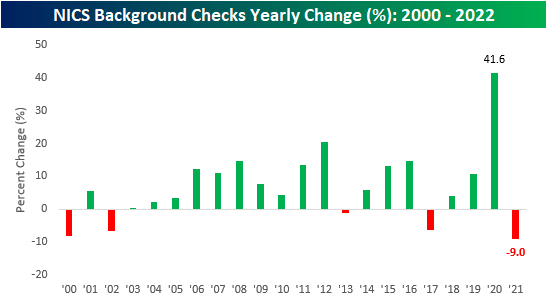 As you may have assumed, the pullback in background checks does not bode well for the gun manufacturing stocks. Below are the charts of Sturm Ruger (RGR) and Smith and Wesson (SWBI) over the last 12 months. RGR is currently 19.9% off of its high but has rebounded since Russia’s invasion of Ukraine. As the international geopolitical situation becomes increasingly uncertain, firearm sales will likely increase, which has been represented in RGR’s 13.7% upside move in the last week. SWBI is performing far worse, down 54.6% from its 52-week highs. The stock has moved 12.4% higher in the last week but remains deep in the hole. In addition, both of these stocks have been impacted by the legal ruling that could hold gun manufacturers liable for incidents involving their firearms. Previously, these companies were entirely immune from litigation. 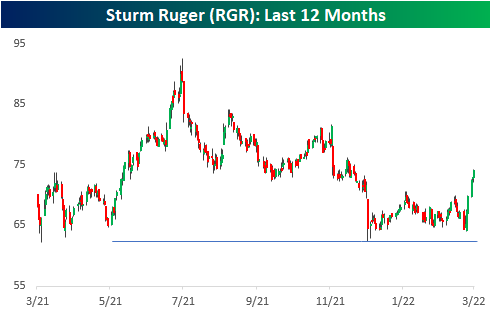 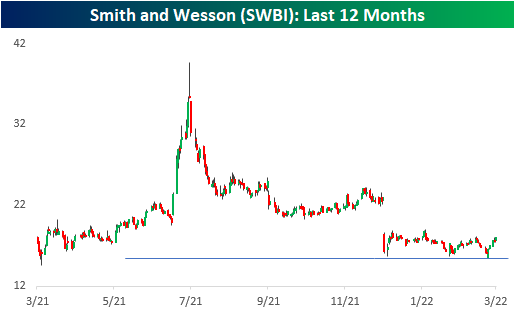 As expected, there is a high correlation between the performance of RGR and the number of background checks run over the last twelve months. Since 2000, the correlation coefficient between these two data sets is 0.90, which signifies a strong positive relationship. Should the Ukrainian conflict boost background checks, look for continued strong performance from the gun manufacturers. 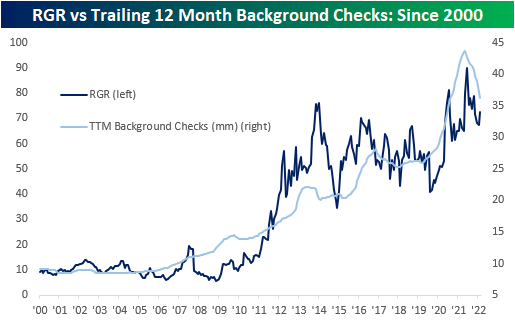