The US (S&P 500) has managed to quickly re-enter a bull market after the 33.92% decline from 2/19 to 3/23 that brought the post-Financial Crisis bull market to an end. Today, the S&P is now 17.45% below the 2/19 high after rallying nearly 25% since 3/23.  As shown in the table below, of the 23 countries in our Global Macro Dashboard, that is the third best rally off of its respective low. Only South Africa and South Korea have rallied more off of their 2020 low on 3/19; a few days before the US bottom.  Around half of these countries found a bottom on the same day as the US, 3/23, while the rest were a few days earlier.  Italy was the first to bottom on March 12th.  But as for the 2020 equity market highs, the US peaked alongside Canada and multiple European countries later than other global economies. For example, South Korea, South Africa, Taiwan, Korea, Russia, Japan, the UK, and Hong Kong all peaked back in January. 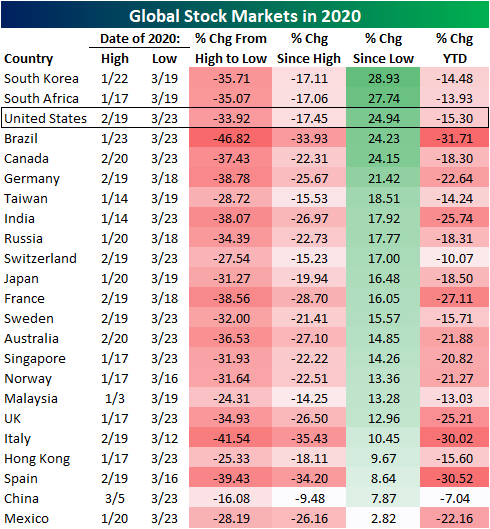 As for longer term trends, below we provide 10-year price charts (in local currency) of the major stock market indices for the countries listed in the table above.   The Covid market crash in the first quarter broke significant long term uptrend channels that were in place for the majority of countries.  The only countries that have managed to somewhat hold onto long-term uptrends are China, Hong Kong, Norway, and Switzerland.  For a handful of countries like Malaysia, Singapore, South Korea, and Spain, their equity markets fell to around the lowest levels of the past decade.

In terms of bounce backs, every country has rallied off of its lows, but Mexico is up the least at just 2.8%.  So far the bounce backs hardly register on the long-term price charts for most countries, but there are some where the bounce has moved price back inside the long-term uptrend channel that had been in place prior to the crash.  Norway, Russia, Sweden, Switzerland, and Taiwan are examples of countries where this is the case.  Start a two-week free trial to Bespoke Institutional to access our Global Macro Dashboard and much more.