Green on the First Day of the Year

The S&P 500 opened higher on the first trading day of 2022 and is up about 20 basis points (bps) as of 11 AM. It’s widely assumed that positive starts to the year portend good things for the rest of the month, but the data doesn’t necessarily show that.  The table below shows the S&P 500’s performance since 1945 for the remainder of January based on how it trades on the first day of trading.  Based simply on whether or not the first day of trading is positive or negative, in the 38 years since 1945 where the year started off with a gain, the average rest of month performance was an additional gain of 0.41% (median: 0.71%) with gains just over 55% of the time.  In the 39 years where the year started off with a decline, though, performance for the rest of the month was much stronger with an average gain of 1.54% (median: 1.81%) and positive returns 64.1% of the time.

When we filter out by years where the S&P 500 gained or lost 1% on the first day of trading in January, returns for the rest of the month were even more skewed.  In the 14 years where the S&P 500 was up 1% on the first day of trading, the average performance for the rest of the year was a decline of 0.51% (median: +0.67%) and positive returns 57% of the time.  Conversely, in the 12 years where the first day of the year experienced a decline of 1%+, the average rest of month performance was a gain of 2.03% (median: 3.42%) with positive returns two-thirds of the time. Broadly speaking, therefore, there is little evidence that strong starts to a year are a precursor of a strong January and vice versa.

As you can see from the dot plot below, first-day performance tends to have a relatively minimal effect on the rest of the month’s performance. Only about 3.1% of the variance seen in the y variable (rest of January performance) is explained by movements in the x variable (first-day performance). Nonetheless, the slope of the linear line of best fit is still negative, so there is a slight negative correlation between the two variables. Click here to view Bespoke’s premium membership options. 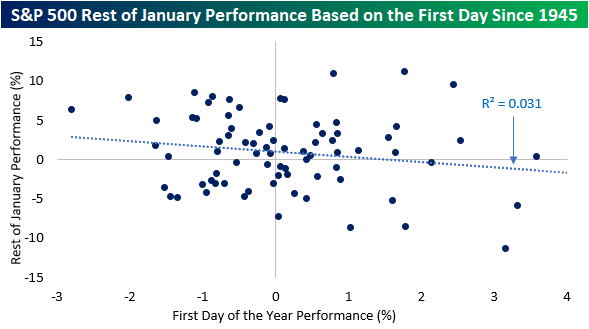