Earlier this week, a hotter-than-expected CPI print countered the belief that inflation has peaked.  Even with that CPI report, though, there have been a number of other indicators pointing to the opposite.  For example, readings on prices from various PMIs have rolled over and PPI decelerated dramatically.  Some other evidence can be found in Google searches.  Google Trends provides tracking of search interest for a provided search term. Lower readings indicate fewer Google searches for a provided term whereas higher readings indicate elevated search interest with these series indexed to their peak reading. In the charts below, we have adjusted these series for seasonality and re-indexed them so that like the raw data, peak readings are indexed to 100.

Searches for “inflation” surged during the pandemic and reached a record high in August.  So far in September, that reading remains extremely elevated but it has pulled back significantly.  The month isn’t over yet, so time will tell if searches for inflation have in actuality reversed to that degree, but the peaks for related terms have moved even further in the rearview.  For example, searches for “costs”, “high costs”, and “expensive” all surged in the first half of the year reaching a high in the spring.  Since then, these readings have been on the decline, although, searches for “expensive” and “high costs” remain well above levels observed in years prior. 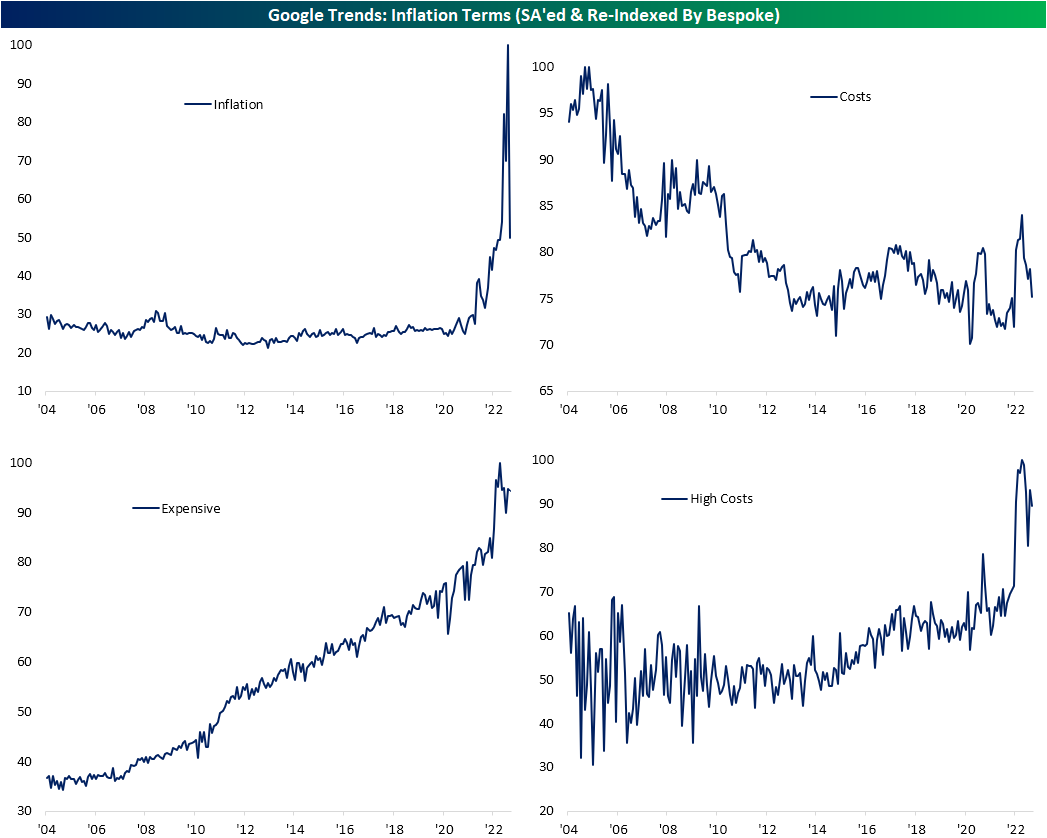 Taking a more granular look at specific consumer expenses shows a bit more nuanced picture.  Rent has been one of, if not the, biggest single driver for CPI recently as we noted in our recap of the latest CPI release. Search interest appears to back that up as searches for the term “rent cost” have exploded higher. Even though it remains well above readings from any other period since the data begins in 2004, that reading has rolled over in the past few months. As for other housing costs, searches for “Utilities Bill” and “Electric Bill” are at and nearing record highs, respectively, after rising sharply in the past year.  Those higher readings are understandable as energy prices have skyrocketed, but gasoline prices are much lower than they were at the start of the summer and search interest has reflected that.  Regardless, higher gas prices makes driving less attractive. In turn, searches for “car pool” are much higher than they were at other times in the pandemic years. 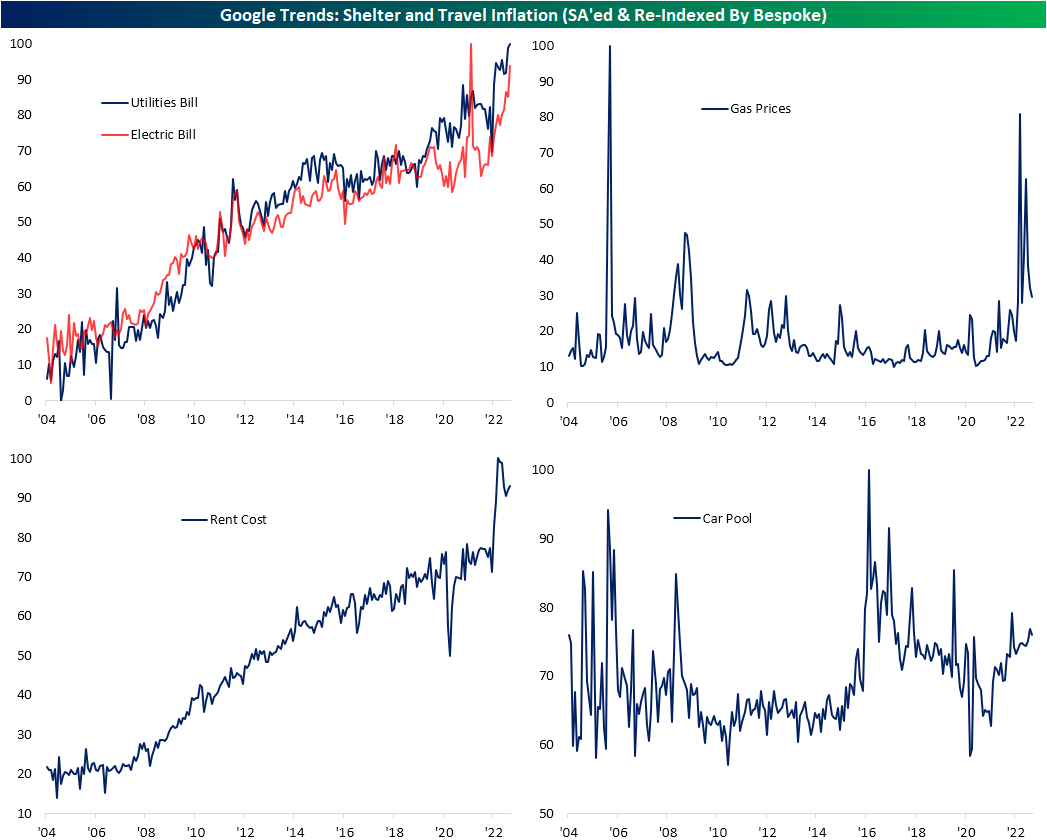 Grocery and food-related searches have also spiked in recent months indicating people are looking into why they are paying more when they head to the store. Again though, similar to rent, these readings have in fact started to roll over in the past few months. 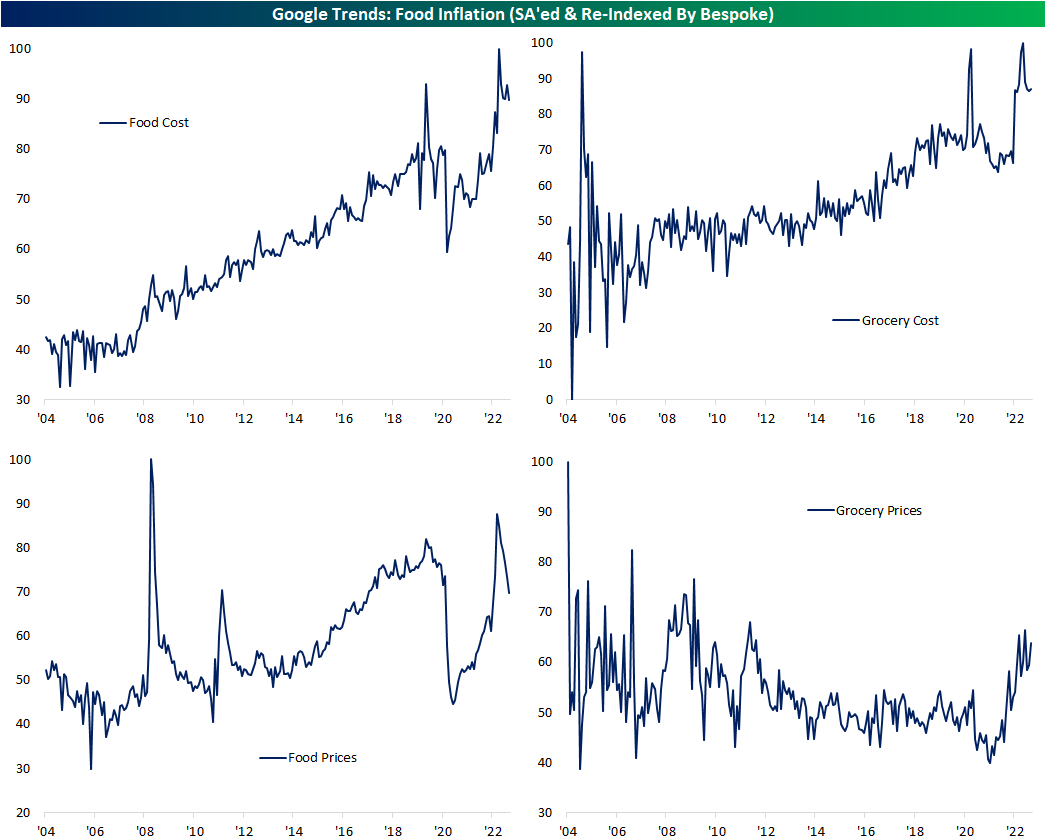 There is only so much the average consumer can do to fight inflation, and the Google Trends data provides some insight into what people are doing to cope with higher costs.  For starters, searches for Electronic Benefits Transfer, or EBT, exploded at the start of the pandemic and have remained extremely elevated relative to pre-pandemic levels.  Current search interest levels are below the highs from the early days of the pandemic, but they have also begun to rise toward the upper end of the range over the past several months.  Meanwhile, searches for “loan” have seen a structural move higher since the pandemic began as well with a particularly sharp increase in recent months.

Searches for “budgeting” used to be much higher in the first decade of the 2000s but as technology increasingly engrained itself into society, those searches appeared to have been replaced by searches for “budgeting apps”. One more specific example is the popular Paypal (PYPL) owned Google Chrome extension Honey which automatically applies coupon/discount codes to online purchases. Over the past year, interest in each of these terms have risen as inflation remains elevated and consumers look for ways to tighten their belts. Click here to learn more about Bespoke’s premium stock market research service. 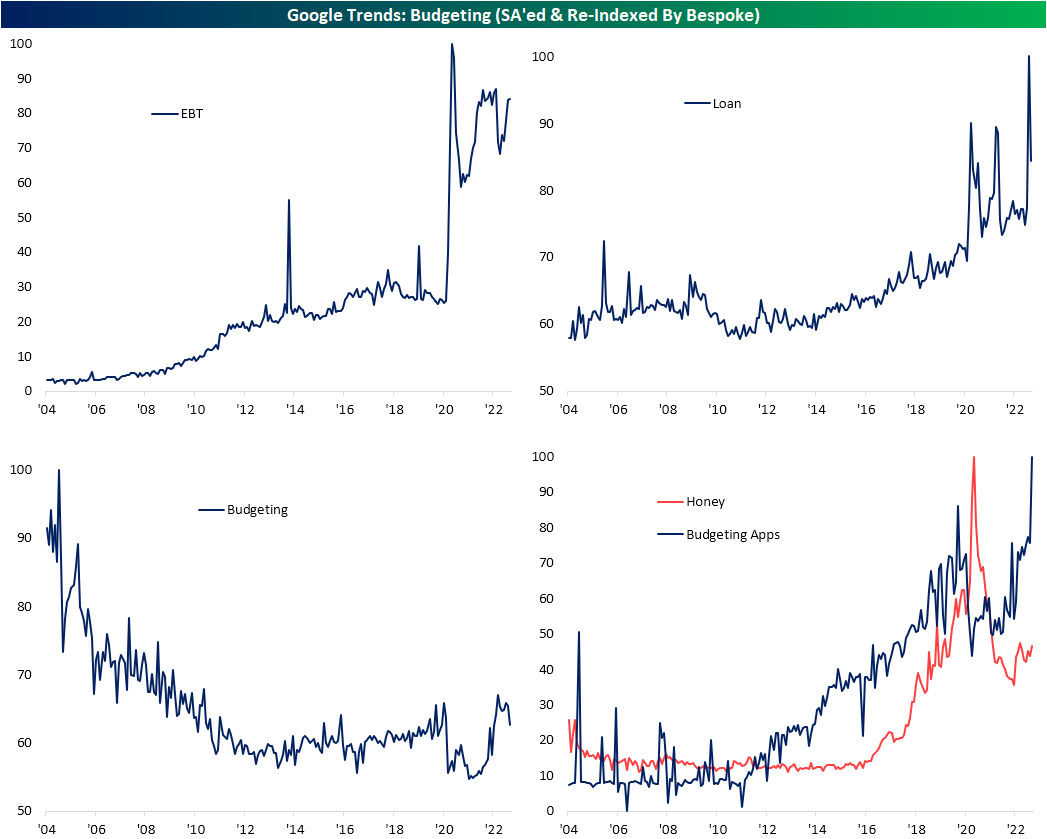