Thursday’s release of initial jobless claims saw a new low for the pandemic with unadjusted claims coming in below 300K for a third week in a row. While that data has set new pandemic lows, Google Trends data on searches for “unemployment” are telling another story.  The two series have had a tendency to track one another relatively well, and whereas claims are at new lows, the Google Trends score for “unemployment” has surged in the most recent week’s data.  The index has risen seven points to 26 which is the highest level since early June, erasing all of the gains from the late spring and summer.  As for the disconnect between the two, there are a couple of potential reasons.  The first of which is seasonality. As we noted last week, claims typically tend to rise in the early fall through the end of the year. Another potential explanation for the uptick in search interest for unemployment is Hurricane Ida.  While searches for the term in Louisiana haven’t seen a large uptick, searches in the state of New York started to surge last Saturday just after the flooding rains hit the region.  If that’s the case, look for an uptick in weekly claims next week.  Click here to view Bespoke’s premium membership options. 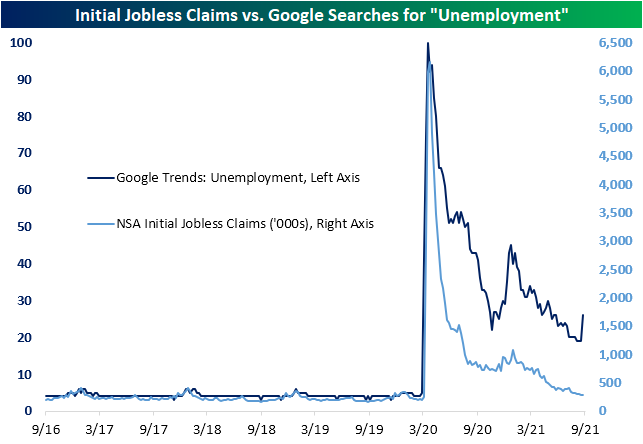