Google Mobility Trends: How Does Your State Stack Up

In an effort to gauge how much different countries, states, and cities are practicing social distancing, Google just recently launched COVID-19 Community Mobility reports which track activity at various types of establishments using the location history of users’ locations.  These reports provide a handy snapshot of how activity at various types of establishments has recently changed.  In the chart below, we have provided a snapshot of how activity at Retail & Recreational venues has changed relative to baseline readings on a state by state basis, but we would recommend that you go to the site and check out the detailed reports for your specific country or state.

The top chart shows each state’s change in traffic sorted by states that have seen the largest declines in traffic all the way to the least, and below that, we have sorted the results alphabetically by state, making it easier to find the individual state you are looking for.  In terms of states where traffic at retail establishments is down the most, Washington DC leads the way with a 64% decline in traffic.  Behind DC, the only other states where traffic is down over 60% are New York (-62%) and Vermont (-62%).  Other states that have seen the largest declines in traffic are Massachusetts, New Jersey, and Michigan, which have all been among the hardest-hit states from the outbreak.  One state that has been hard hit but where social distancing has been behind the curve is Louisiana at -45%.  Of all the states, traffic has declined by at least 30% in all but one state (Arkansas: -29%), but other states where there has been a relatively low amount of social distancing so far include Mississippi, Nebraska, Tennessee, and South Dakota.  All of these states have seen traffic decline by 35% or less. Start a two-week free trial to Bespoke Institutional to access our full library of research and interactive tools. 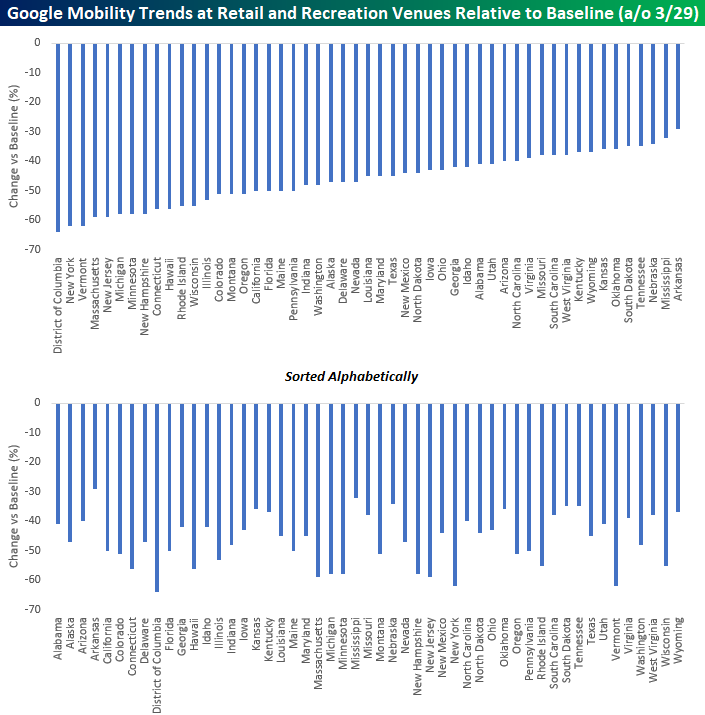