Good and Bad From Jobless Claims

Last week’s initial jobless claims print was higher by 33K to 812K which means it was unchanged from the prior week’s reading.  While this week’s number didn’t meet expectations of a decline to 760K, it is not all bad news considering claims did drop to 793K which is the lowest level since the first week of the year. 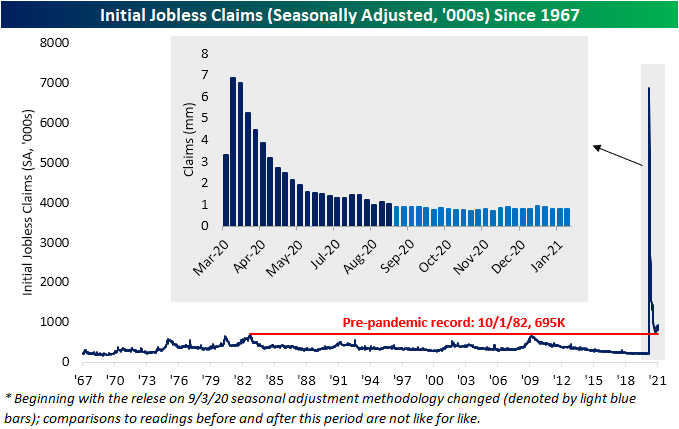 On a non-seasonally adjusted basis, consistent with seasonal patterns, claims continue to fall with a 36.6K drop this week down to 813.1K.  That is the lowest level in the unadjusted number since the week of November 27th when claims stood nearly 100K lower. 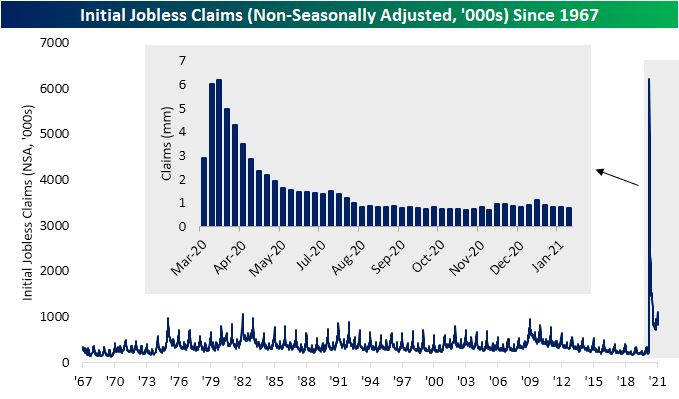 As for other programs, initial jobless claims through the Pandemic Unemployment Assistance (PUA) program also declined by a little over 34K this week just as they did last week. At 334.5K, PUA claims are at the lowest level since the week of January 8th.  Combined with regular state claims, total initial claims stood at 1.148 million, down by 71K week over week and marking a fourth consecutive weekly decline. While total initial claims remain off the lows of just above 1 million from November, this week’s print marked a five-week low. 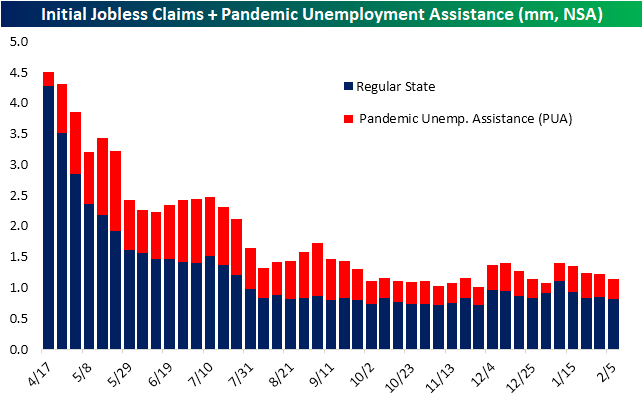 Regular state continuing claims—lagged one week to initial jobless claims—persistently keep moving lower with the most recent week falling to a new pandemic low of 4.545 million from 4.69 million last week.  That week over week decline was a fourth straight also meaning 18 of the past 20 weeks have been met with a decline in continuing claims. 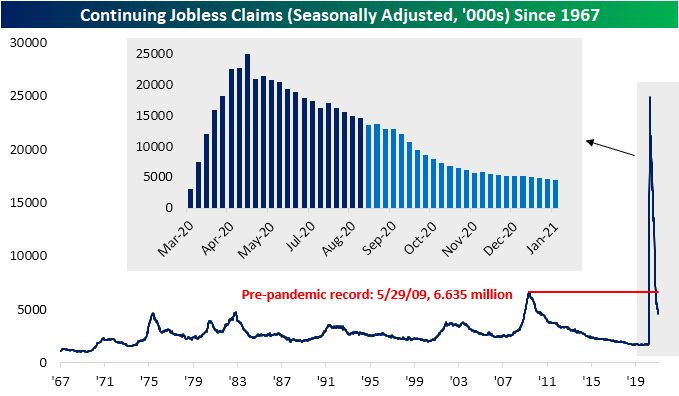 The addition of other programs adds another week’s lag to the data. That means the most recent data on continuing claims across all programs covers the week of January 22nd. In spite of the consistent declines in regular state continuing claims, the overall picture including these other programs muddies the water. There have been significant upticks in other programs that led total claims to significantly rise from 17.87 million to 20.47 million; the highest level since late November. Again, that uptick was not on account of regular state claims. In fact, it was one of the only programs to see a decline week over week falling by 29.6K.  On the other hand, PUA claims rose by 1.497 million which comes after a 1.636 million increase two weeks prior. That was not the only program to see a week over week increase of over 1 million though.  Pandemic Emergency Unemployment Compensation (PEUC)—which is an extension program for those whose benefits have or are set to expire—saw claims rise by 1.173 million. That is the single largest uptick since the program began earlier in the pandemic.

Those surges between the two programs meant that they also account for much larger shares of total claims than before. While the regular state claims only account for around a quarter of total claims- the lowest share since the pandemic related programs began in March-  PUA claims take up 42.6% of all claims and PEUC claims account for 23.3%. That is the most since mid-December for both of these programs.  While those significant increases are a concern and should continue to be watched for a better read on how material of an increase they are, it is possible that the upswings are due to continued catching up in reporting after these programs narrowly avoided expiration at the end of last year. For example, looking at individual states, PEUC claims out of California alone nearly tripled rising by over 1 million between the weeks of January 16th and January 23rd.  Ohio also saw these claims more than double. As for PUA claims, after reporting zero claims the previous week, Colorado and Ohio reported claims of 30,659 and 10,156, respectively.   Click here to view Bespoke’s premium membership options for our best research available. 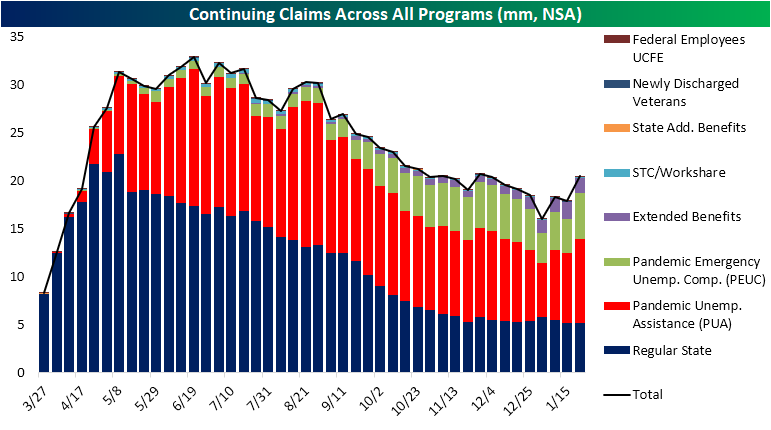 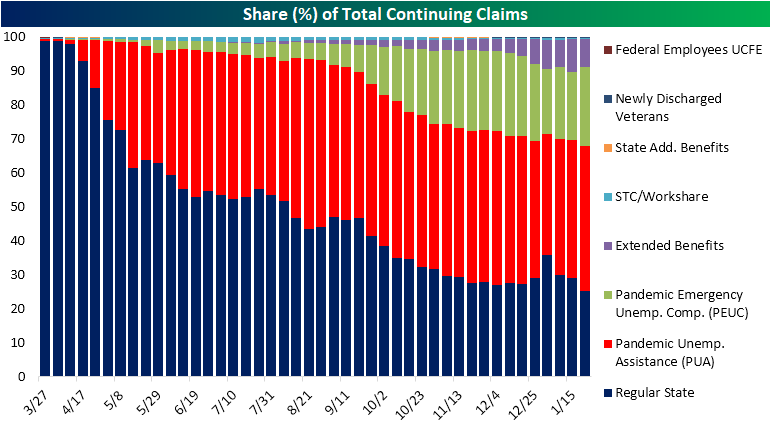