With risk assets sharply lower this morning, investors have flocked to safe havens. Treasuries are now at or near record-low yields and gold is up well over 2%. For the Gold ETF (GLD), today’s gap of 2.46% is the first gap up of 2% or more since November 9th, 2016; the day after the 2016 presidential election.  Since the ETF first began trading in 2004, there have been a total of 57 days (including today and that 2016 occurrence) in which GLD has gapped up 2% or more.  A little less than half (44%) of those occurrences happened during the last recession from December 2007 through June 2009. Otherwise, as shown in the chart below, these gaps have been fairly spread out without any obvious tendency to mark major tops or bottoms for the yellow metal. 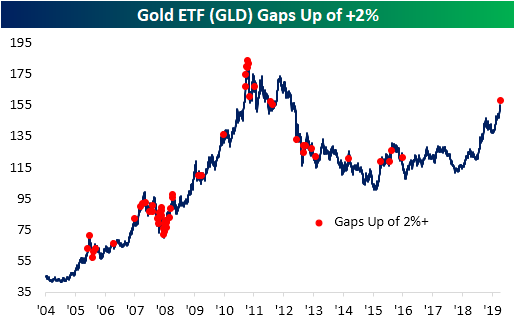 Today’s gap of 2.46% is just about in line with the size of past gaps up larger than 2%.  As for the rest of the day, these types of large moves at the open have not led to much further buying from open to close with an average gain of only 4 bps. GLD also only rises from open to close around half of the time.  As for one week later, GLD has only been higher 48.2% of the time. Granted, the size of those pullbacks have not eaten into the gap up much with an average decline of just 11 bps (median is a 9 bps decline).  Start a two-week free trial to Bespoke Institutional to access our interactive economic indicators monitor and much more. 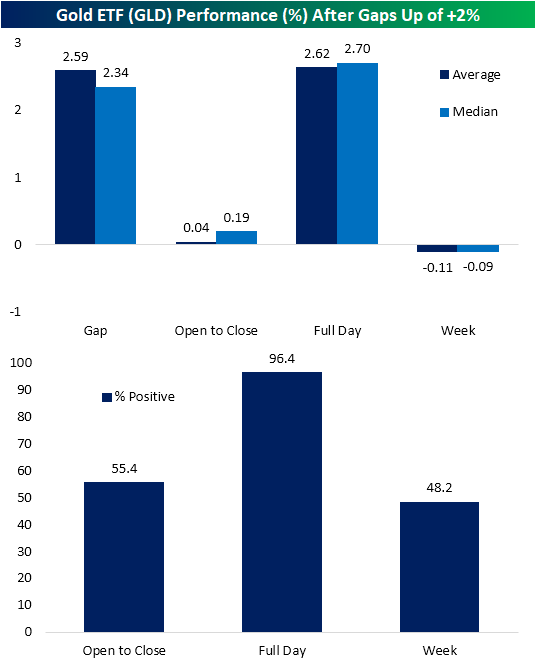