Last week, we released the Commodities section of our 2020 Outlook report.  We highlighted that 2019 has been a mixed year for commodities with plenty of losers and winners.  While energy commodities have generally done the best—with the exception of natural gas which has been the biggest loser in the space—gold has been another notable winner having its best year since 2010 with the seventh-best return YTD of the commodities in the Bloomberg Commodity Index.  The yellow metal is also just one of four commodities that have delivered a positive total return over the past five years while the broad index has fallen 4.64%.

Similar to other commodities, gold prices are susceptible to long term trends in price movements. The 1970s inflationary episode saw massive increases in prices, before surging real interest rates in the late 1970s and early 1980s drove down gold prices dramatically.  After doing almost nothing for the next decade and a half, prices rose almost ten-fold.  The post-crisis precious metals collapse cut prices almost in half but have been rising more recently. 2019 saw price sharply increase, especially after taking out the critical multiyear resistance around $1350-$1400.  This year, gold has been an almost perfect proxy for short term rates, rising as the Fed got more dovish in the middle of the year before reversing as the Fed ‘s tone also turned around in Q4. Click here to join Bespoke Premium with a special offer and gain access to our full 2020 Outlook report. 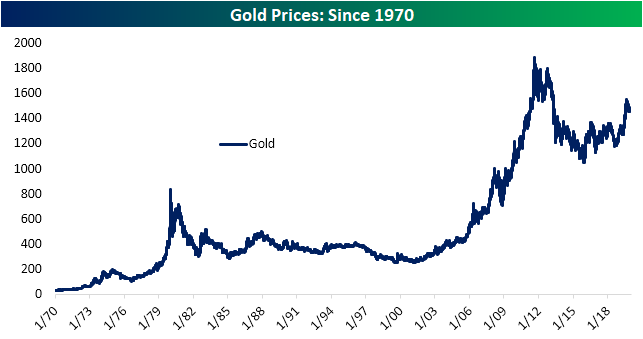