Gold in All Forms Glitters

What a day for gold today – both physically and in its ‘digital’ form.  Gold prices are trading up 3% today as just about every asset class is up in price as the value of the dollar declines.  After pulling back more than 11% from its August highs, the price of gold has broken its downtrend from that high. 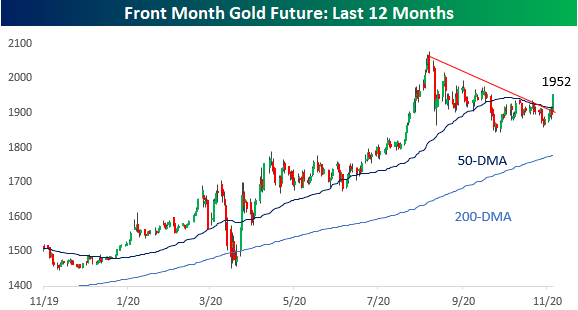 Bitcoin is often referred to as ‘gold’ in a digital form, and it was certainly in rally mode today.  With a one-day gain of over 7%, bitcoin is back above $15,000.  Today’s move is actually only the largest upside move since 10/21, but it would be the first close above $15,000 since January 2018 and only the 18th time in the digital currency’s history that it closed above that level.  Up until recently. there was an uptrend line where bitcoin rallies would run out of steam, but in the last two days, it has found some added fuel to push higher. 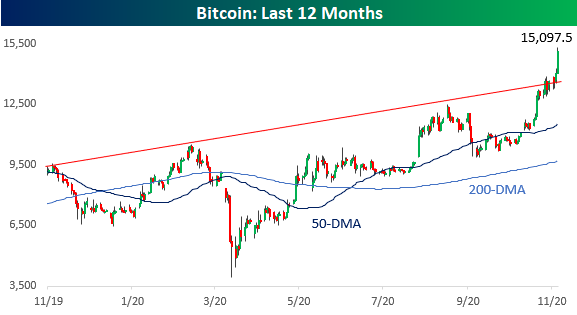 One bitcoin will currently buy a holder 7.7 ounces of gold which is the highest ratio since August 2019.  The last time bitcoin was at 15,000, though, gold was much cheaper as a bitcoin would buy you more than 12 ounces of gold.  Additionally, back in June 2019, the ratio between the two was just under 9.  From the peak in late 2017, the ratio of bitcoin to gold made a series of lower highs, but back in July it finally broke above that downtrend range and has been off to the races ever since.  Three years ago, the bitcoin mania that would grip markets in the last few weeks of 2017 was just starting to take off and conversations at Thanksgiving tables all over the country included a cousin, aunt, uncle, or even grandmother who was either bragging about getting rich or knew a person who was getting rich buying crypto.  With bitcoin prices surging again this year heading into the holiday, we could be in for a repeat of those conversations again this year only instead of around the dinner table, it sounds like many of these conversations will be taking place over Zoom.  Click here to view Bespoke’s premium membership options for our best research available. 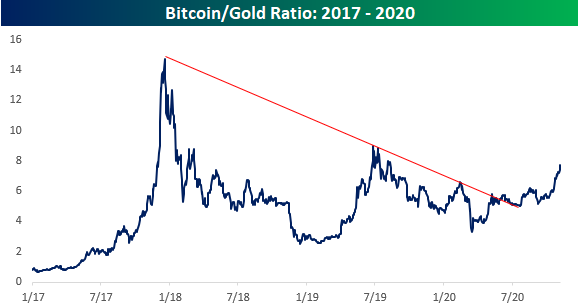