The gold ETF (GLD) has gone through a nine-year drought from new all-time highs, but as it gets closer to its prior highs from September 2011, there are three possible upcoming technical set-ups.  The first would be a massive multi-year “cup and handle” pattern.  You can see the “cup” that has been forming over the last nine years.  For the “handle” to form, GLD would need to go into a sideways consolidation phase from here for a bit.  Once that consolidation phase occurs, the pattern would suggest a significant leg higher over potentially years (rather than months).

The second — and more negative — setup would be a bearish “double top.”  This would happen if GLD gets right up to its highs from September 2011 and fails to break through that resistance

Finally, the third setup would simply be a breakout higher from here.  GLD could simply continue moving higher and break right through resistance at its 2011 high.

Regardless of what happens, the “cup” that has been forming for nearly a decade now is something you don’t see often.  It will be interesting to watch this pattern from a technical perspective over the next few months.  Keep an eye on it!  Click here to view Bespoke’s premium membership options for our best research available. 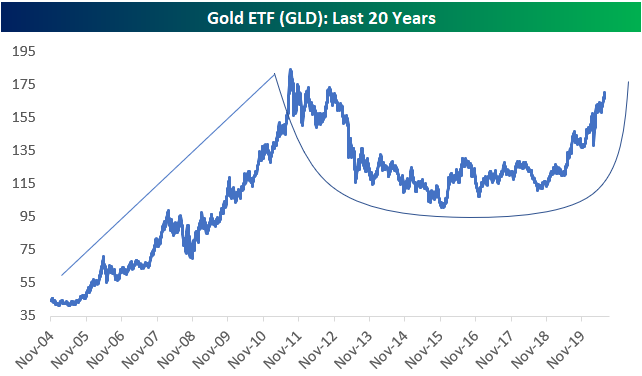