Just over a week ago, gold,  the SPDR Gold Trust ETF (GLD) closed above its 200-DMA for the first time since February 1st.  The rally that took GLD above its 200-DMA has also broken the downtrend that had been approaching a year in age.  Today, GLD is up another 0.22% to the highest level since January 7th. 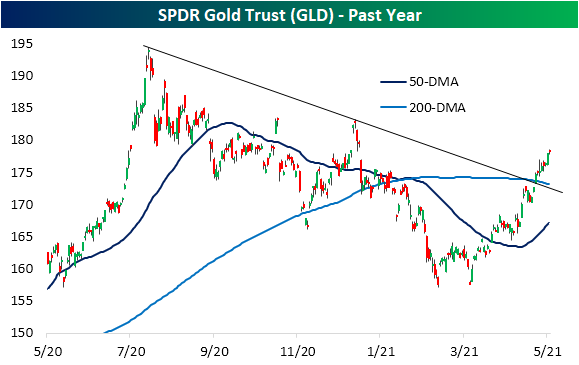 Given another move higher today, GLD is also on pace to close in the green for the tenth day in a row.  That is not necessarily the case for other measures of the yellow metal like front-month futures which experienced a 2 bps decline on Monday, but with regards to GLD that is tied for the second-longest winning streak on record.  At ten days long, the current streak of consecutive gains is the longest run since the 11-day streak ending 1/2/18.  Prior to that, July 2011 was the only other double-digit streak with a few other nine-day-long steaks; the most recent of which ended in July of last year. 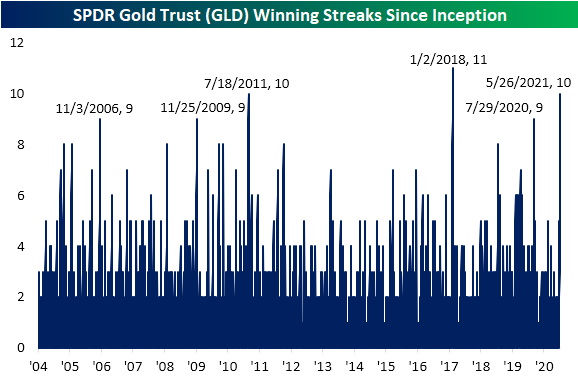 The recent rally in GLD continues to set up the over-decade-long cup and handle pattern that we have made note of in the past, though, GLD still needs to rally another 8.15% to take out last summer’s highs to complete the pattern.  Given the nearly 8% rally over the course of the current winning streak, GLD has reached extremely overbought levels at more than 2 standard deviations above its 50-DMA and begs the question of how much steam is left.

While it is certainly too small of a sample size to put too much weight on, looking at the streaks in 2011 and 2018 that also went on for 10 or more days there has been somewhat mixed performance. The instance in 2011 saw further gains one week later and particularly strong performance over the next month with an 11.4% move higher. Granted, those gains were erased over the course of the rest of the year after the streak came to a close. One year out, GLD was lower than where it stood at the end of the streak. The more recent streak on the other hand was lower one week after coming to an end. While there was a bit more upside in the next quarter, six and twelve months later it was again lower.  In order for GLD to take out last year’s high, it’s going to have to buck its recent trend that followed prior extended streaks. Click here to view Bespoke’s premium membership options for our best research available. 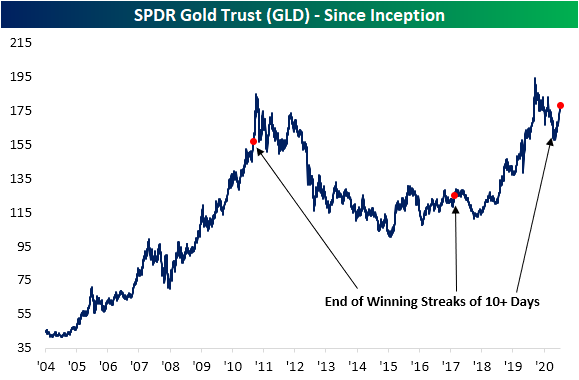 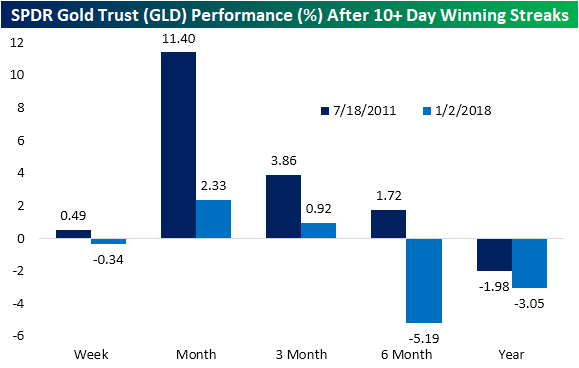