Everyone knows that gold ‘glitters,’ but for the last year, it’s more like ‘gloiters’ as the commodity has been loitering around the $1,800 per ounce level. This morning, gold is trading modestly above $1,800, which is a level it has crossed above and below multiple times in the last 12 months.  In fact, the average price of gold over the last 12 months has been $1,795 per ounce, so there hasn’t been a lot of movement. 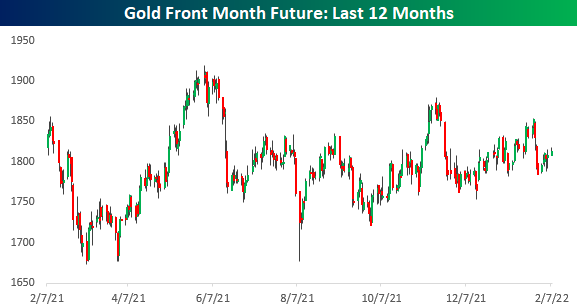 Taking a longer-term look at gold shows some interesting trends.  On a five year basis, the last 12 months of sideways trading looks like part of a consolidation phase for the commodity as it digests its big move higher from mid 2018 through early 2020 when prices surged from under $1,300 per ounce to more than $2,000. 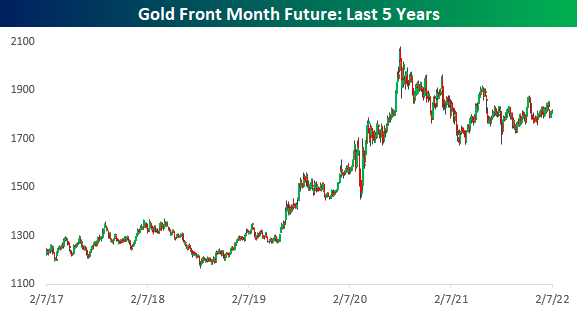 While gold’s move over the last year looks like a consolidation of a strong rally on a five year chart, a ten year look at gold shows another trading range where prices today are right around the same level they were in 2012.  As long as gold can hang around in the $1,700 to $1,800 range, the longer-term technical picture looks positive. 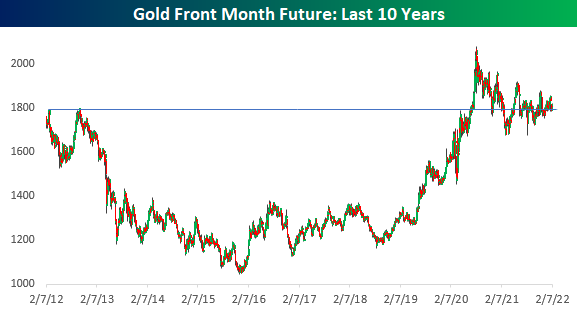 Just as the last year’s sideways pattern for gold looks like a consolidation of a strong rally on the five year chart, the sideways pattern of the last ten years looks like a very long-term consolidation following the rally in the early 2000s where prices rose more than six-fold from under $300 per ounce in early 2002 to nearly $1,900 in August 2011.

With a one-year trading range of less than 15%, gold is trading in its narrowest one-year range since July 2018, and before that, 2005.  Eventually this range is going to break, and based on prior experience, once the range breaks, it usually expands pretty rapidly, so one direction or another, gold looks poised for a significant move going forward.  See more in-depth market analysis from Bespoke by starting a two-week trial to Bespoke Premium today. 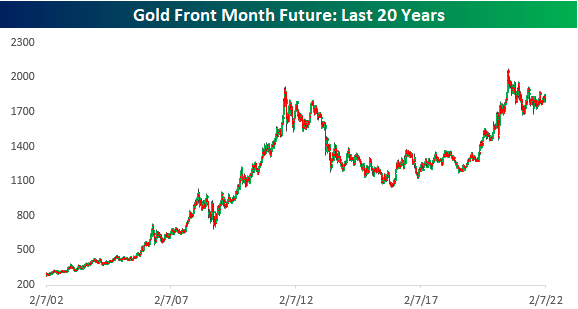