Gold Breaks Out Ahead of Election and CPI

High inflation and the aggressively hawkish monetary policy that has come in response, an election, and battered risk assets lend plenty of reason for investors to have sought out safe havens for their money this year. However one such asset, gold, has gotten crushed all the same.  The yellow metal is down 18.5% from its 52-week high set in the early spring but on the bright side, it has begun to break out of its downtrend.  As shown below, gold has tested support at roughly around $1,620 at multiple points this fall. After the last successful test only about a week ago, front-month futures have surged over 5%.  The result has been an upside break of the longer-term downtrend as well as the 50-DMA.  This is the first time since the spring gold has traded considerably above that moving average.

While that positive technical development is in the books, it is not necessarily out of the woods yet.  There has not been a higher high yet meaning a move above last month’s unsuccessful test of its 50-DMA (around $1,730) would be the next hopeful sign for gold bugs. 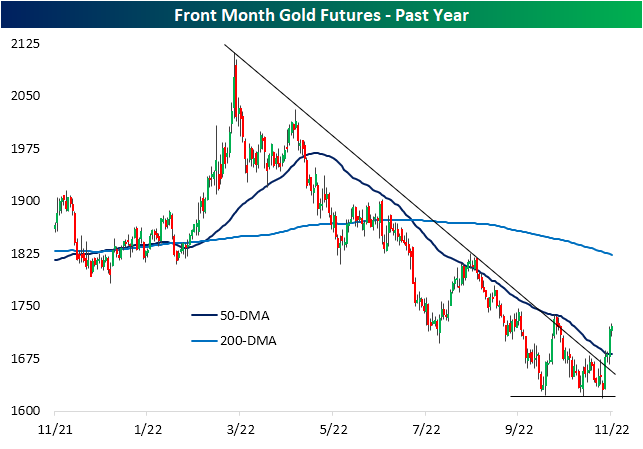 Additionally, the current run has occurred at an interesting point in time.  Historically considered a prime safe haven asset, gold’s run over the past few days has coincided with a couple of catalysts for uncertainty in the headlines: the midterm election and tomorrow’s CPI print.  Based on where gold is trading as of this writing, the metal is up nearly 5.5% over the past four days.  As shown below, in the four days leading up to every other CPI release since at least June 1998, that ranks as the fourth-best pre-CPI rally and only the fifth time it has rallied more than 5%.  Click here to learn more about Bespoke’s premium stock market research service. 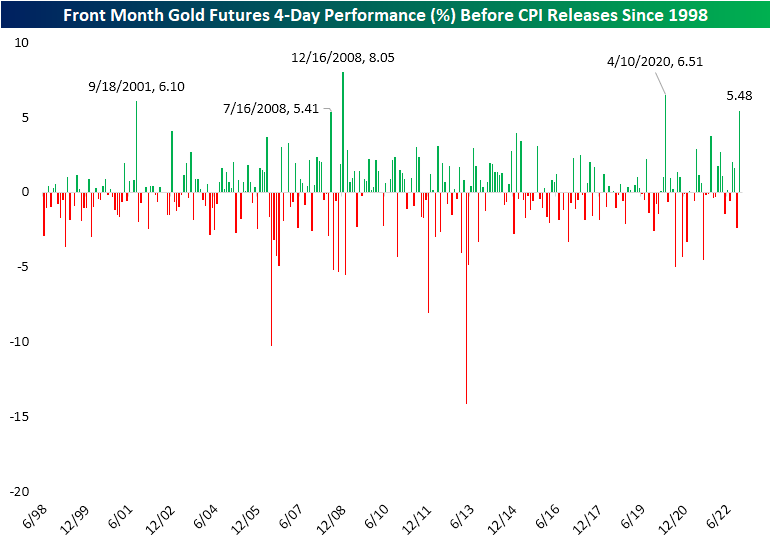