Gold and Bitcoin Bounce Off Support

With all the liquidity that has been put into the system, the number of Americans concerned about the dollar’s purchasing power has seen a great deal of inflation.  Just last week, legendary investor Stanley Druckenmiller became the latest person to publicly worry about the possibility of double-digit inflation in the coming years.  With those types of concerns becoming increasingly mainstream, it’s no wonder that the price of gold remains right near record highs.  Despite the recent 5% pullback in prices, gold remains just under $2,000 per ounce after bouncing off support just above $1,900 which is a level that also coincides with its 50-day moving average. Since its high in early August, each bounce off the $1,900 level has been met with a lower high, so until this consolidation phase either breaks above $2,000 or below $1,900, it’s probably best to just sit tight. 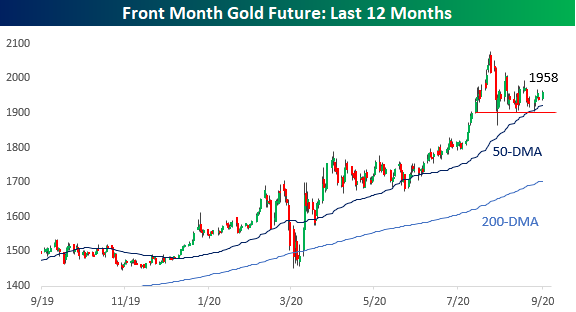 Bitcoin has also been trading in somewhat of a consolidation pattern after breaking above resistance at $10,000 in late July.  While bitcoin’s price rallied above $12,000 just as gold was peaking, its price pulled back in early September as risk assets corrected.  However, just as $10,000 provided stiff resistance on the way up for the past year, the first test of $10,000 to the downside has held up so far.  Investors increasingly view bitcoin as the digital version of gold, so by that logic, any bullish argument for gold should apply to bitcoin as well.  Like what you see? Make sure to sign up for a free trial to unlock all of Bespoke’s analysis and interactive tools. 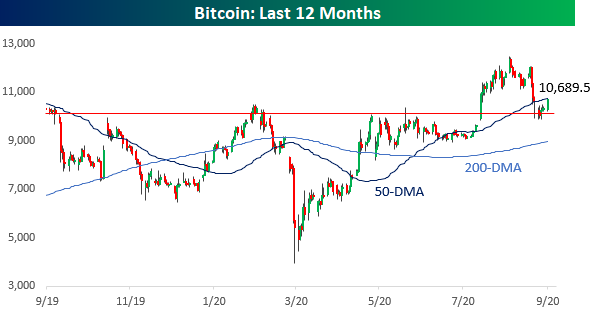