Super Bowl LIV kicks off later this afternoon in Miami, and this year’s game is important for the AFC as a win by the Chiefs would put it in a tie with the NFC for Super Bowl victories at 27 each.  Interestingly enough, the last time both conferences had the same number of Super Bowl wins was all the way back in 1990 when they each had twelve.  That was also right in the middle of the 13-year stretch where the NFC defeated the AFC every year in what was the longest run of Super Bowl dominance by either conference. Looking at the chart, it’s interesting to see the various runs by each conference.  From Super Bowl III to XV, the NFC only won twice.  Then from XVI to XXXI, the AFC won only once, while in the twelve years from XXXII to XVIII, the NFC won only three times.  It’s only in the last ten years that there has been some parity in the games as each conference has won five times. 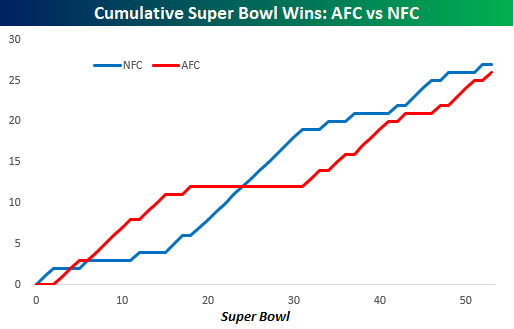 Most people have already heard about the Super Bowl indicator and its implications for the stock market.  While no one in their right mind would ever make stock market investments based on the outcome of a football game (although we’ve heard of crazier theories), it makes for good conversation while you’re watching the game.

The table below summarizes the historical performance of the S&P 500 after the Super Bowl based on which conference came out on top.  In the 26 years that the AFC hoisted the Lombardi trophy, the S&P 500 averaged a gain of 6.6% for the remainder of the year with positive returns 69.2% of the time.  For the NFC, though, returns are more impressive with an average gain of 10.5% and positive returns 77.8% of the time. Broadly speaking, the NFC has been better for stocks, so as much as Andy Reid may be the sentimental favorite, your wallet should be rooting for the NFC.

Another reason you should be rooting for the 49ers tonight is because of their past record.  In the five prior years where they won the Super Bowl, the S&P 500 was up for the remainder of the year every time by an average of 20.2%!  The individual rest-of-year returns in those five years were 21.9% (1982), 23.3% (1985), 23.3% (1989), 1.4% (1990), and 30.9% (1995).  Given all the concerns surrounding the coronavirus in the last two weeks, we think a number of investors would even sign up for 1.4%!  Besides the 49ers, there are only three other teams who have won the Super Bowl at least three times and also seen positive market returns following each of their wins (Broncos-3, Steelers-6, and Redskins-3).  The Chiefs, on the other hand, have not had such a lucky record.  The one time they won the Super Bowl was back in 1970 (Super Bowl IV), and after that win, the S&P 500 was modestly down for the remainder of the year with a decline of 0.3%.  Another positive?  The Chiefs have also been on the losing end of the Super Bowl once.  That was in the first Super Bowl when they lost to the Packers.  After that loss, the S&P 500 went on to rally 14.1% for the remainder of the year.  Go Niners!  Start a two-week free trial to Bespoke Institutional for full access to our market research and interactive trading tools. 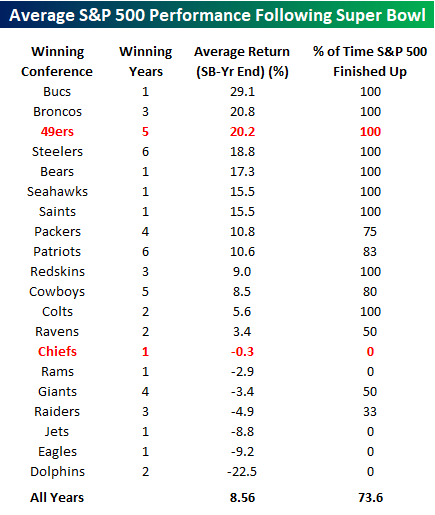