Generally speaking, stock markets around the globe have recovered a solid portion of their losses from earlier in the year. The MSCI World index is now just 8.86% below its February 12th all-time closing high after rallying 38.5% off of its March 23rd low. 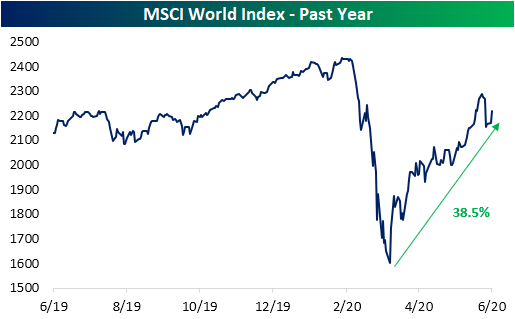 With equities running higher around the globe, valuations have risen as well.  The median price to earnings ratio of the 23 countries in our Global Macro Dashboard is now 19.89. That is actually down from some of the higher readings of the past couple of weeks when the P/E ratio was north of 20. As shown in the chart below, only about 10% of days over the past decade have seen the median P/E ratio at 20 or more.  Most of those days came in January and February of this year and in parts of 2015 and 2016. 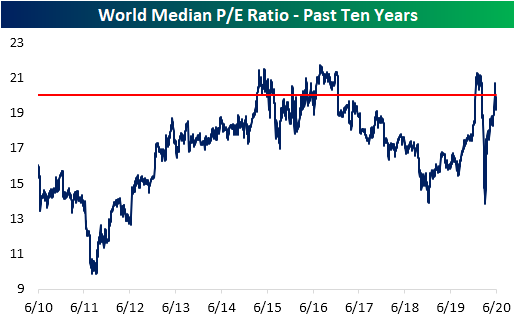 As shown in the table below, the median stock market’s P/E ratio is now in the 88th percentile of the past decade’s range.  As for the 23 Global Macro Dashboard countries comprising that median reading, several including the US, Germany, Japan, and Norway are in the 90th percentile or better of the past decade’s range.  Of all 23 countries, Norway has the highest overall P/E ratio of 41.22. Many of the other countries with the highest valuations like Brazil, Spain, and Japan all are also in the upper end of the past few years’ range.  Meanwhile, China actually has one of the lowest valuations when compared to other countries, albeit that is at the highest level of the past couple of years. Other countries like South Africa, Mexico, and Canada are similarly at the lower end of the range of current country P/E ratios while also being at the upper end of their own range of the past few years. Click here to view Bespoke’s premium membership options for our best research available. 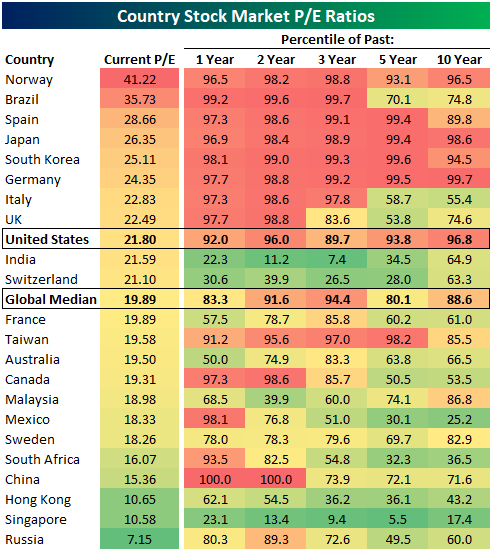