In spite of concerns of a slowing global economy, the unemployment rates of most major economies tracked in our Global Macro Dashboard around the world still appear to be at fairly healthy levels at the lower end of the past decade’s range. As shown in the table below, Canada, China, France, Germany, Japan, Russia, Spain, Switzerland, the UK, and the US are all within the lowest 5% of readings for unemployment of the past decade.  While most other countries find themselves in more middling percentiles, only South Africa’s unemployment rate is at its highest level of the past decade at 29.1%; 7.6 percentage points above the decade’s low.  Other than that, only Brazil, Italy, and Sweden are currently more than one percentage point above their 10-year low in unemployment. 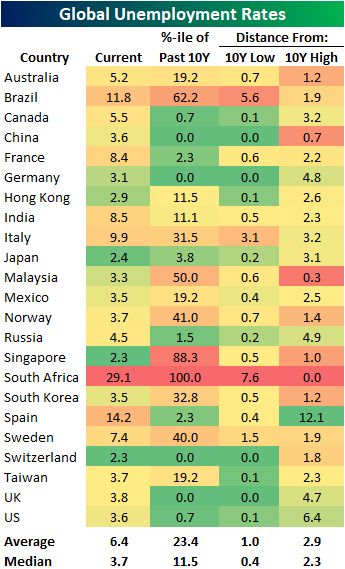 Contrary to the rest of the world, the South African unemployment rate has been on the rise consistently over the past decade.  But since 2015, unemployment has risen more rapidly bringing it to its currently elevated levels.  On the other hand, the US, UK, Germany, and China are all near or at their lowest levels of the past ten years.  While they are at their lowest levels relative to themselves, Singapore and Switzerland have the absolute lowest unemployment rates of the 23 countries tracked in our Global Macro Dashboard at 2.3%. What is interesting about these two countries is that while Switzerland’s reading is the lowest of the past decade as it sits in a downtrend, Singapore’s unemployment was much lower earlier in the decade given the rate has actually been in a slight uptrend over the past several years. 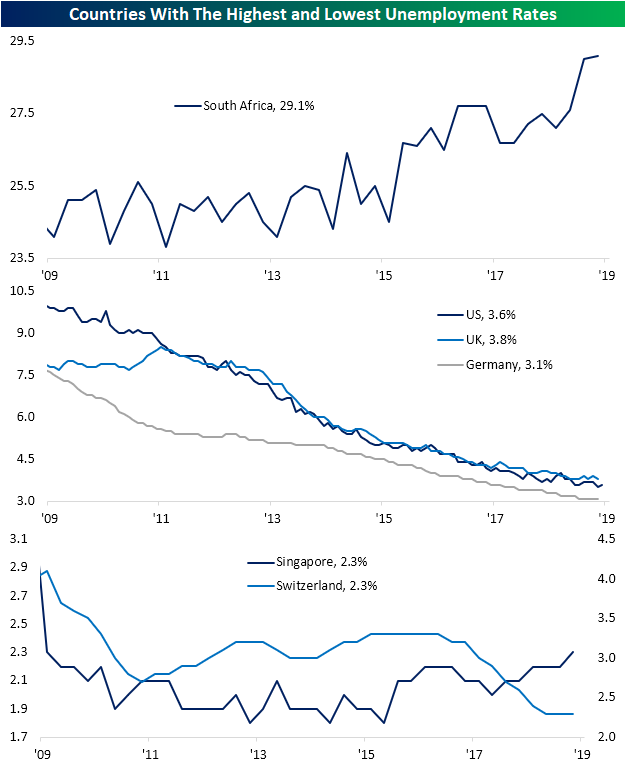 Overall, the global employment situation looks healthy with the average and median unemployment rates for the 23 Global Macro Dashboard countries near or at the lowest levels of the past decade. The only caveat to this otherwise healthy picture is that the rate of improvement has slowed lately.  As shown in the second chart below, the year-over-year change for the average of these countries actually ticked into positive territory in the past month, rising 0.02 percentage points since one year ago. That is by no means an apocalyptic sign seeing as this occurred other times this cycle; the other times being in 2016 and from 2011 to 2013.  On the other hand, the median—which would dampen effects from outlier readings from the likes of South Africa—is still showing YoY declines in the global unemployment rate.  Start a two-week free trial to Bespoke Institutional to access our interactive Global Macro Dashboard, economic indicators monitor and database, and much more. 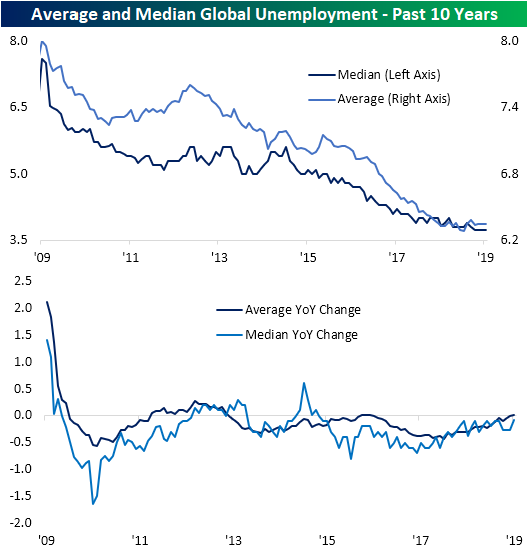