According to Bloomberg market cap readings, as of yesterday’s close, the United States had a 44% share of aggregate global stock market cap; topping the next largest country, China, by a factor of over four.  As shown below, the US has seen its share of world market cap increase by 2.84 percentage points so far in 2021, which is a huge gain.  This shouldn’t come as too much of a surprise, though, given that the US has outperformed nearly every major country stock market this year.  In terms of other countries that have seen an increase in share this year, China has increased by 0.38 percentage points, while India has increased by 0.42 percentage points.  The two big losers this year have been Japan and Hong Kong, with each losing more than a percentage point of share.  Members of the European Union have an aggregate share of 9.82%; less than a quarter of the share of the United States. All told, the top 20 countries hold 93.06% of global market cap, and the top five have a 68.70% share. 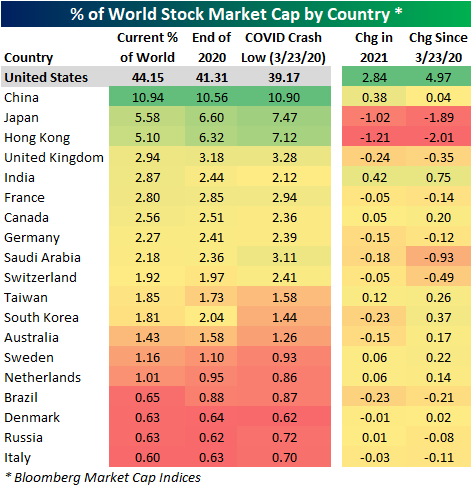 During the mid-2000s bull market leading up to the Global Financial Crisis, the US was consistently losing its share of global market cap to the rest of the world.  From the end of the Dot Com Crash to the peak just before the Financial Crisis, the US lost more than 15 percentage points of share.  That was a banner period for both emerging and developed markets outside of the US.  Since 2009, though, the US has been steadily gaining ground with some acceleration in the past couple of years as US equities have generally outperformed the rest of the world. Notably, the COVID crash did not result in the US shedding any significant share of market cap seeing as the sell-off was a global affair.  Instead, the US has seen its share increase nearly 5 percentage points since the COVID Crash low.

The US has been increasing its share versus the rest of the world for more than a decade now, and at some point one has to think this trend will reverse for a bit.  International equity markets, especially emerging markets, have essentially gone nowhere versus their levels from the mid-2000s.  There are plenty of investors out there that have taken on more and more exposure to international markets in recent years because of their relative weakness to the US, and so far nothing has materialized.  Click here to view Bespoke’s premium membership options. 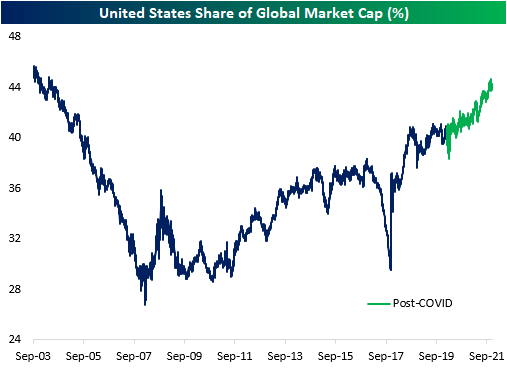