The recent equity sell-off has clearly been global in nature as concerns of a global pandemic rise.  Perhaps the most surprising aspect of the way equities have sold off recently is that the country that has been hardest hit by the virus is closer to its YTD high than any other major global equity benchmark.  The chart below shows the distance that each major global equity benchmark has declined relative to its YTD high.  China’s Shanghai Composite is down just 4.45%, which is better than any other country shown.  Sure, you could argue that the Chinese government is manipulating the market and prohibiting investors from selling, but even the ETF that tracks the CSI 300 (ASHR) is down less than 6%, so anyone could go in and trade at these levels.  Manipulated or not, the numbers are the numbers.

At the bottom of the list, Brazil’s Ibovespa index is down more than any other country at 11.6% and that country has only reported one confirmed case so far.  With respect to US indices, the Russell 2000 is down the second most of any major global benchmark (-9.19%), while the Nasdaq is down the fourth most at 8.68%.  Even the S&P 500 is down close to 8%.  These weak US readings come in a backdrop where there have only been 57 confirmed cases and all but a couple are instances where Americans contracted the virus outside of the United States and have been brought to the US under quarantine.  Join Bespoke Premium to access Bespoke’s most actionable stock market research and analysis.  Start a two-week free trial now! 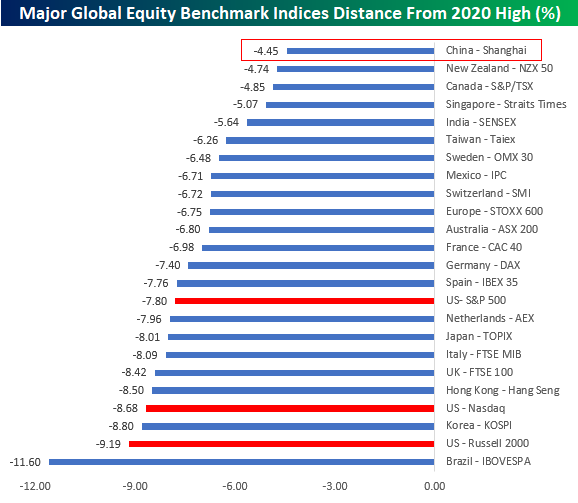