The British Pound (GBP) has had no shortage of catalysts in the past week given the recent developments in Brexit news—which we have been consistently covering in our Morning Lineup. Following yesterday’s decision from the UK’s Supreme Court, GBPUSD rose almost half a percent (stronger GBP), continuing the rally that has taken place over the past several weeks. That rally is off of a support level around the lows of the past decade near 1.2 that the pair first tested early last month and once again this month.  Turning to today, yesterday’s move has been reversed and then some as the pound has weakened by more than 1%. Although the pair is still healthily above this support as of now, if declines continue—erasing the past few weeks’ moves higher—then GBPUSD could once again find itself within reach of ten-year lows. 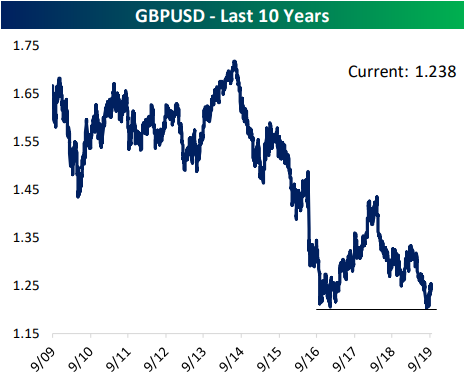 Another one of the currency pairs of the 23 countries covered in our Global Macro Dashboard is showing a similar pattern to GBPUSD. As with the pound, the Australian dollar versus the US dollar has also weakened to support that was established several years ago. While GBP has managed to hold up at this support, AUDUSD has fallen through to its lowest levels of the past decade.  In the past couple of weeks, the pair has come back to restest this support as resistance, but it failed to make a move higher indicating potential for more downside. 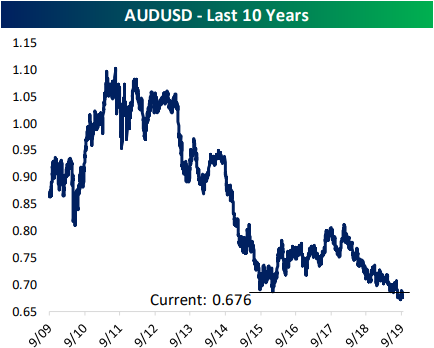 Meanwhile, the dollar has been strengthening against the Brazilian real. In fact, the dollar is nearing its strongest levels versus BRL of the past decade.  Coming up near resistance around 4.2, USDBRL is forming a cup and handle pattern and is looking to break out higher. 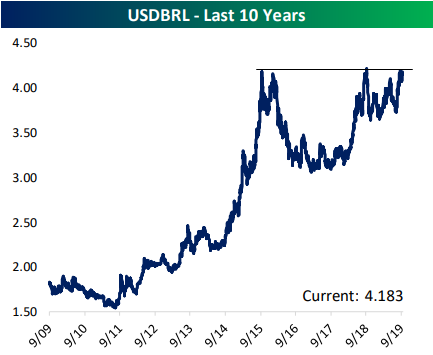