The Omicron variant has quickly become dominant across the globe, leading to surges in cases. With the higher transmissibility of this variant and the inability of vaccines to prevent infection, the seven-day average of new COVID cases has approached or even surpassed prior peaks in a number of countries.  Click here to view Bespoke’s premium membership options.

In South Africa, ground zero of the Omicron variant, the seven-day average of daily new cases surged from basically zero to a record high in less than a month.  In the three prior waves, on the other hand, the amount of time that elapsed from the time cases started rising until they peaked was twice as long at about two months.  As quickly as the most recent wave caught fire, it already appears to have crested as the number of cases has already declined 22% in just three days!  As shown in the chart below, following the peak in the three prior waves, it took an average of 9.3 days for the number of cases to drop as much or more than they have in this wave.  According to Our World In Data, only 32% of the population has received at least one dose of the vaccine. 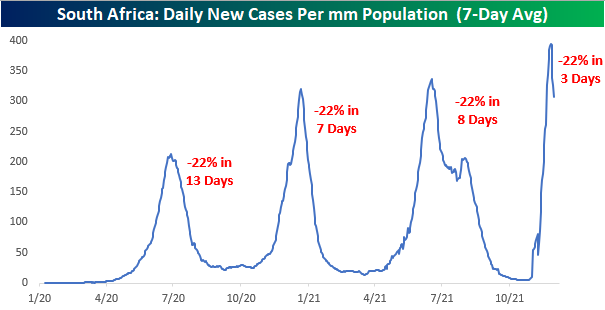 In the UK, the Omicron variant arrived as that country was still dealing with Delta, and the combined wave of those two strains has yet to peak.  There are certainly seasonal trends at play here, and the combination of colder weather and the most transmissible variant yet has resulted in the seven-day average of cases surging 46.3% above the previous peak. The current rate of infection is the highest of the countries we’re highlighting in this post with 1,289 cases per million people. 77% of the UK population has received at least one dose of the vaccine. 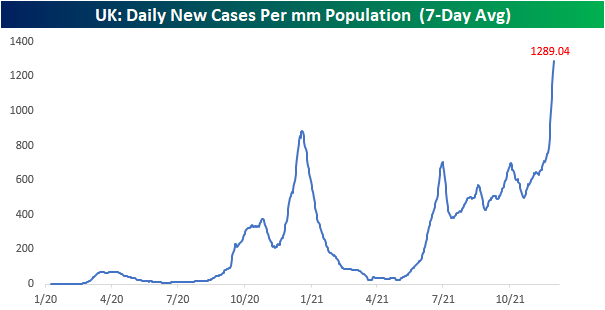 Cases in Germany have peaked already after more than doubling the previous peak’s daily average case count. Since this peak, the 7-day average has declined by 38%. Similar to South Africa, the case count appears to be declining substantially, giving credibility to the idea that Omicron is only a temporary phenomenon. 73% of the German population has received at least one dose of the vaccine. 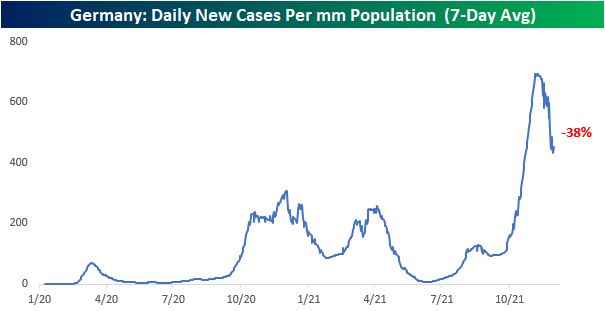 France’s case count is approaching its previous peak, but the rate of increase in cases is slowing somewhat since 12/8.  78% of the population has received at least one dose. 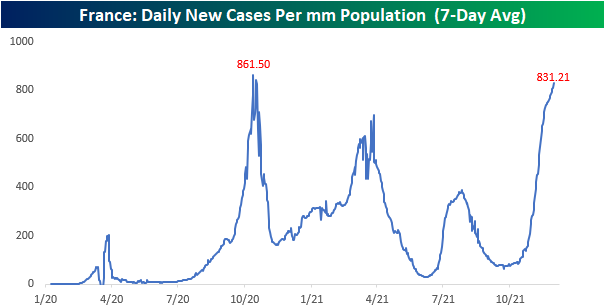 Spain is in a similar position to France but is yet to see a substantial decrease in the rate of new cases. The current rate is the highest since February and is ~15% below its all-time high from January. 83% of the Spanish population has received at least one dose of the vaccine. 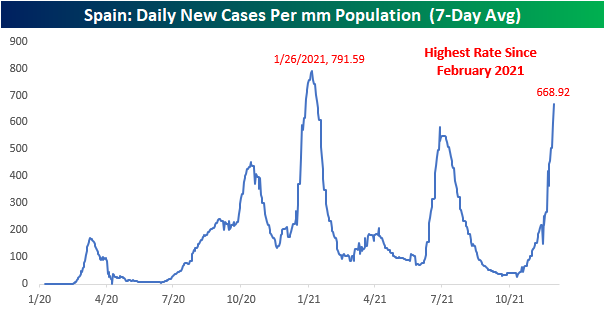 The rate of infections in Italy is currently at the highest level since November of 2020 and the rate of new cases seems to only be accelerating. New cases are still 27% below their all-time high, but there are no signs of slowing yet. 81% of Italy’s population has received at least one dose of the jab. 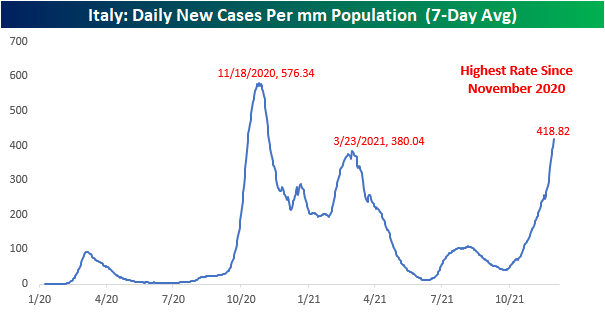 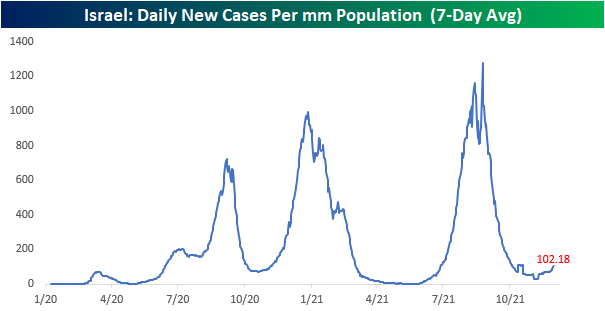 India was hit hard by the Delta variant but is yet to see cases tick higher amid the global spread of Omicron. Currently, the new case rate is near lows, and the last seven days have averaged just 4.95 cases per million, an extraordinarily low rate. Only 60% of India’s population has received at least one dose. 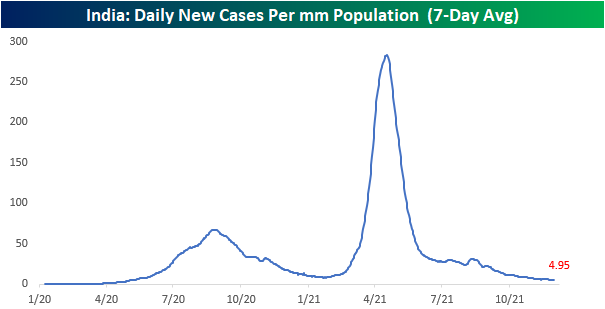 Cases in the United States are still below the prior two peaks, but with cases surging, that may not last long. Still, the seven-day average of new infections is 13% below the peak in September and 41% below the peak of last winter. The holiday season will likely lead to an increase in new cases as individuals travel and spend time indoors with family and friends, but then again, with the holidays in the rearview mirror, demand for tests will likely decline. 73% of the US population has received at least one dose. 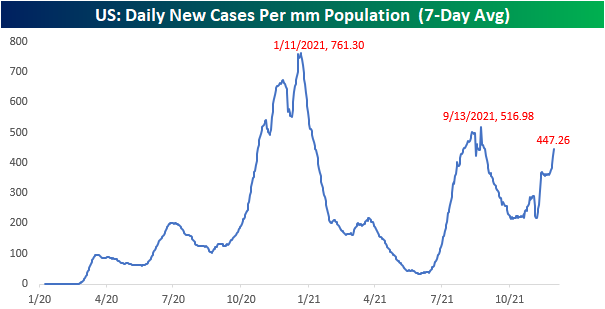 Canada is already at peak levels of new cases and the slope of the increase is practically straight up. The combination of colder temperatures (more time spent indoors) and a highly transmissible variant has led to the spike seen in Canada, which is currently almost 4% above its previous highs. 83% of the Canadian population has received at least one dose, and the country has been strict in regards to COVID protocols. 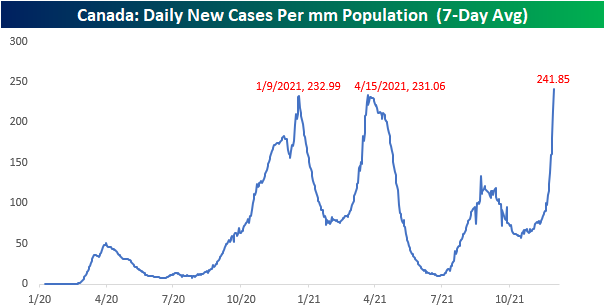 Unlike its North American neighbors, Mexico is yet to see any increase, most likely due to warmer weather. Lower testing rates may also have an effect on this data. The current rate is very close to pandemic lows. 64% of the Mexican population has received one dose of the vaccine. 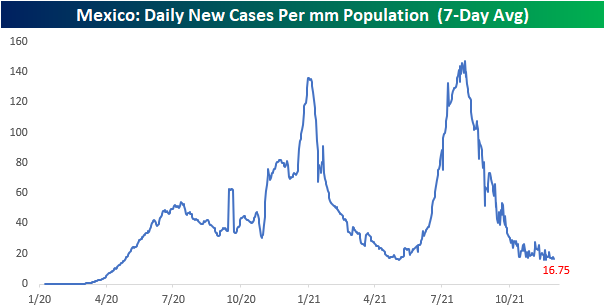 All-in-all, there seems to be little correlation between vaccination rates and new case rates, and factors like climate appear to be a far larger factor.  Countries like Israel, Mexico, and India have new infection rates that are far below countries in the Northern Hemisphere with colder climates at this time of year. The UK, Spain, France, and Germany all have elevated levels of infection as a percentage of the population, and all of these countries have relatively high levels of vaccination. When it comes to getting infected, Omicron has shown an ability to evade vaccines, although some reports suggest that the infection is less severe.