Throughout the day on Friday, quarterly US vehicle sales figures from WARD’s Automotive Group were released. In aggregate, US sales continue to plummet likely more as a result of supply constraints and low inventories.  Total sales came in at 12.18 million SAAR versus expectations and a previous reading of at least 13 million. 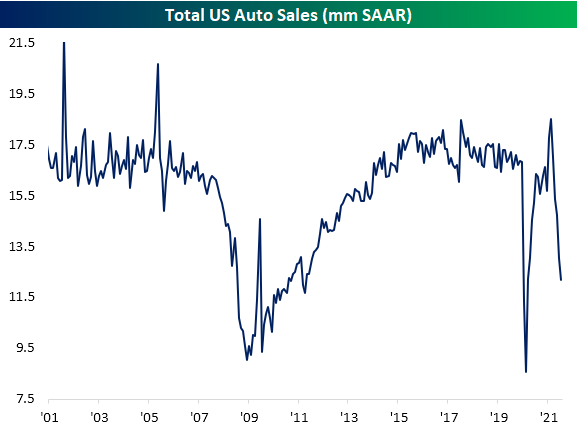 Delving into which brands are the most prominent, below we show the percentage share of Q3 sales that can be attributed to each brand.  As shown, Toyota (TM) topped the list in the third quarter by a wide margin accounting for 16.63% of total sales versus 13.02% for the next highest brand: GM (GM).  Stellantis (STLA), Ford (F), and Honda (HMC) are the only other brands that accounted for a double-digit share of total sales. Of those, only Honda and Toyota saw their share grow versus before the pandemic with the latter seeing much larger growth. While those brands make up a larger share of total sales than they did at the end of 2019, they are not the ones to have seen the largest growth year over year.  Tesla (TSLA) holds that title with sales up 30% YoY.  Mazda, Hyundai, Volvo, Kia, BMW/Mini Cooper, and Toyota are the only other brands to have grown year over year. 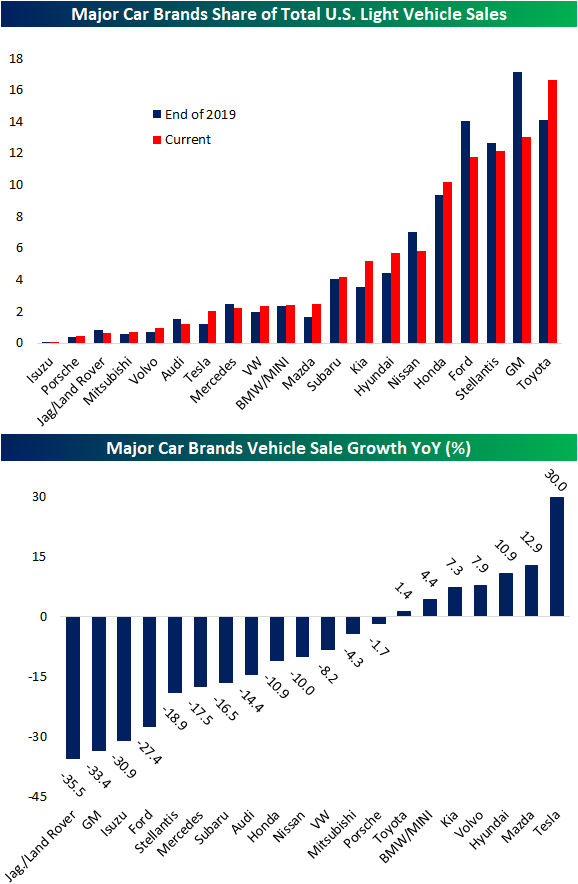 In spite of the massive drop in aggregate sales, the stocks of these global auto manufacturers have held up well, especially relative to the broader market as the S&P 500 is now down 5.4% from its 52-week high.  As shown below, at the end of September, Bloomberg’s World Auto Manufacturer Index stopped short of its 52-week high set on January 25th.  Currently, the index is down roughly 2.16% from those levels, but it also appears to be finding support at its 50-DMA as it has a handful of other times over the past several months.  The strength in the auto stocks in the face of weak sales suggests that investors know the drop in sales is due to supply issues instead of demand issues, and they expect those supply issues to be resolved at some point.  Click here to view Bespoke’s premium membership options. 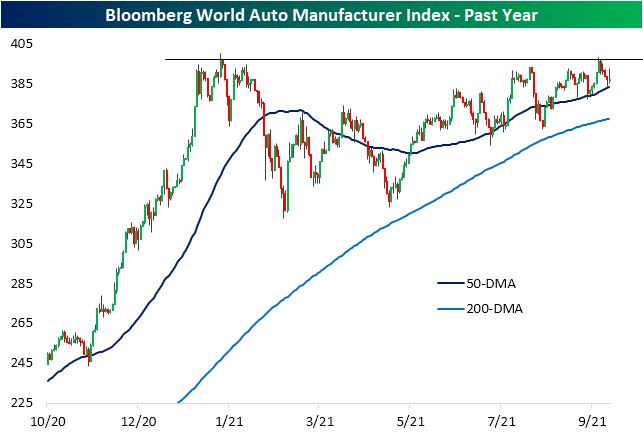