Give Thanks For The Big Drop In Claims

Initial jobless claims data of late has been all over the place.  In early and mid-November, the indicator broke out of the range that had been in place over the prior several months topping out at 228K which was the highest level since June.  Over the past two weeks, though, those higher prints have completely reversed themselves, and this week’s report came in at the lowest level since April’s multi-decade low of 193K.

In recent history, it hasn’t been common to see this large of an improvement in claims in such a short period of time.  Just two weeks ago, claims had risen by 17K over the prior two weeks. As shown in the chart below, that was the largest two-week increase since the 37K increase in April when claims were coming off of the aforementioned low of 193K.  Now, the 25K drop in the past two weeks has been the largest two-week decline since September 2017 when it fell from 300K to 260K. Looking back over the past decade, there have only been a handful of other times where claims have fallen by 25K or more (red line) in the span of two weeks. In other words, claims data has become increasingly volatile in the past month. 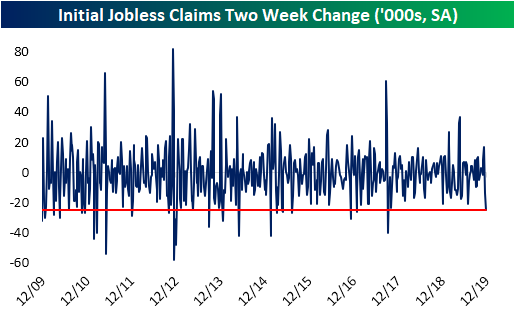 Given the recent highs in early and mid-November and new lows in the past two weeks, the four-week moving average is only back to where it was at the start of November.  Dropping to 217.75K from 219.75K last week, the 2K drop is only the largest decline since the first week of September. So while the past month has painted a conflicting picture, and seeing as one week does not make a trend, this week’s stronger reading has not had a major impact on longer-term trends. Looking ahead to next week, assuming no major revisions and a similarly strong print next week, the moving average does have the potential to continue to improve as one of 227K readings roll off the average. 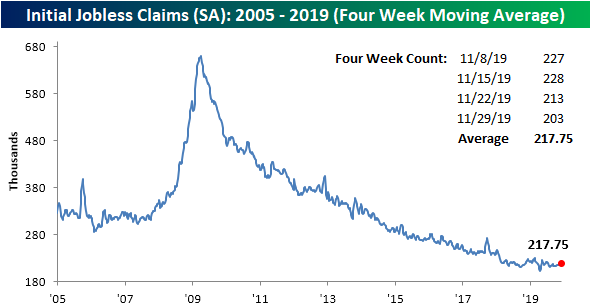 Non-seasonally adjusted data similarly had a strong showing this week with a decline to 216.7K from 252.4K last week.  This week’s decline is in the seasonal context of claims rising to their yearly highs.  This week’s non-seasonally adjusted claims also continued the trend of readings below the average for the current week of the year since 2000. 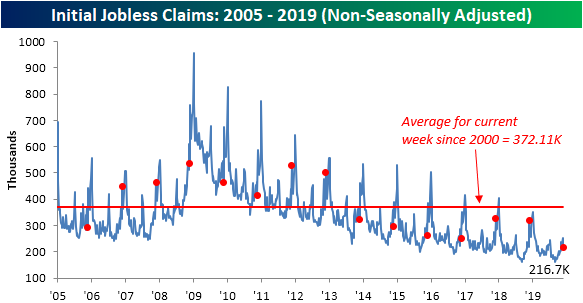 The 35.7K decline week-over-week for the non-seasonally adjusted number was the largest decline since July 19th of this year.  Even more notable is the decline year over year which totaled more than 100K. While YoY changes like this were fairly common in the first years coming out of the last recession, there have been only a handful of other times in the past decade that NSA claims have fallen by such a large amount.  The last time this happened was in 2013, similarly during a year when Thanksgiving week came one week later than the year before.

While this week’s data certainly showed improvement, due to seasonal factors—namely the timing of the Thanksgiving holiday coming on the 48th week of the year rather than the 47th like the past couple of years—we would be hesitant to take it entirely at face value and jump to the conclusion that labor data has dramatically and concretely improved to the degree that the data suggests. But, even if it should be taken with a grain of salt, an improvement is an improvement. Start a two-week free trial to Bespoke Institutional to access our interactive economic indicators monitor and much more. 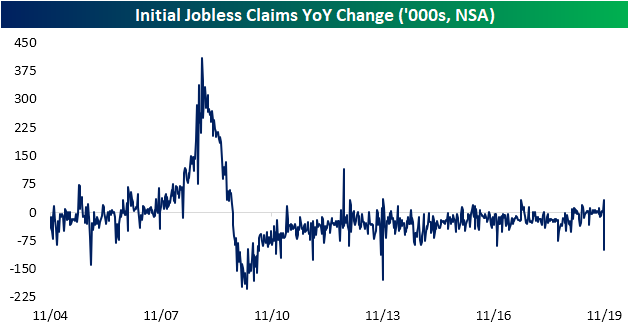