Yesterday, Goldman Sachs’ lead economist cut the bank’s GDP forecasts for the first half down to 0.0% in Q1 and a decline of 5.0% for the second quarter.  Based on how things are moving and in the direction they are going, 5% may sound like an optimistic scenario.  While all sorts of numbers have been thrown around regarding just about everything lately, we wanted to help put in perspective just how severe a quarterly decline in GDP of 5% really is.

The chart below shows US quarterly GDP going back to 1950.  First of all, negative quarters for GDP have been uncommon for the US economy over time.  In the 291 quarters since 1950, the US economy has only contracted in 41 (14%) of those quarters.  5% declines, however, are incredibly rare.  SInce 1950, there have only been six prior quarters where GDP declined by 5% or more with the most recent being back in December 2008.

Obviously, the circumstances surrounding each contraction in GDP is different, but prior quarters where there was such a large shock to the system were typically not ‘one and done’ events. In fact, all six of the prior quarterly contractions of 5% or more were either immediately preceded or followed by another quarter of negative growth averaging a decline of over 2%. Start a two-week free trial to Bespoke Institutional to access our full suite of research and interactive tools. 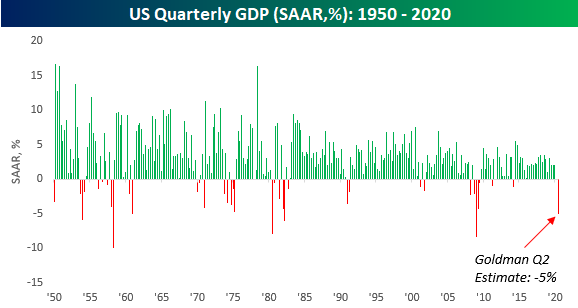