The Colonial Pipeline ransomware attack resulted in a shutdown of a major artery on the East Coast. While the pipeline is partially back online and anticipated to once again be fully operational later this week, the temporary supply outage has resulted in headlines of long lines and some gas stations even totally running out of product to sell, and that has only started to feed on itself causing more hoarding.   As a result, the national average for a gallon of gasoline according to AAA crossed back above $3 this week for the first time since October 2014. 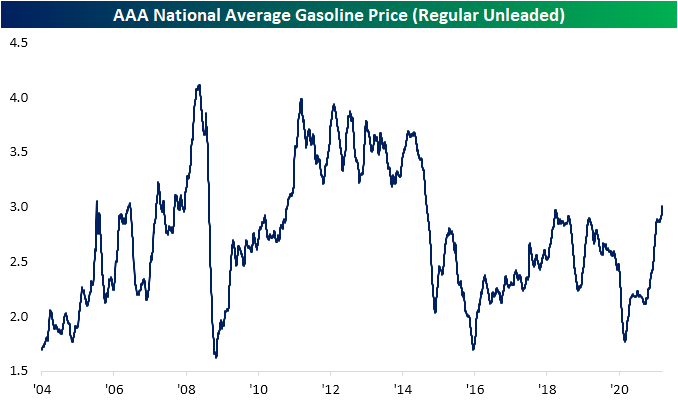 According to AAA, just in the past day, the average price of a gallon of regular unleaded gasoline has risen 2.3 cents and over the past week, it is up 8.1 cents. At an annualized pace, the price of a gallon of regular gasoline is up 281.24% in the past day and 143.9% over the past week. Higher grades of gasoline and diesel have risen by a lesser amount but have likewise seen significant appreciation. 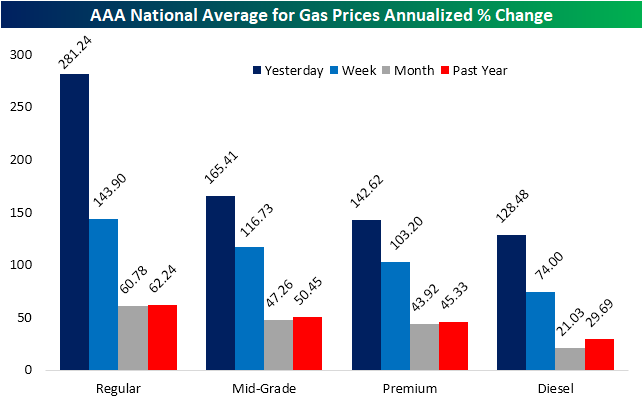 At face value, those readings may look alarming, but from a historical standpoint, we’ve seen far larger. Looking again at the annualized weekly change for regular gasoline in the chart below, the current reading actually comes up just shy of the top decile of all readings since 2004, and there were even higher readings as recently as this past February and March.  Even accounting for seasonality (gray shaded regions in the chart highlight every month of May), prices tend to move higher this time of year, and there have been multiple times in the past that gasoline prices have risen at as fast of a clip as now in the month of May. For example, last year was one instance in addition to 2015 and 2016. So, from a national perspective, this week’s uptick in prices at the pump is not necessarily extreme. 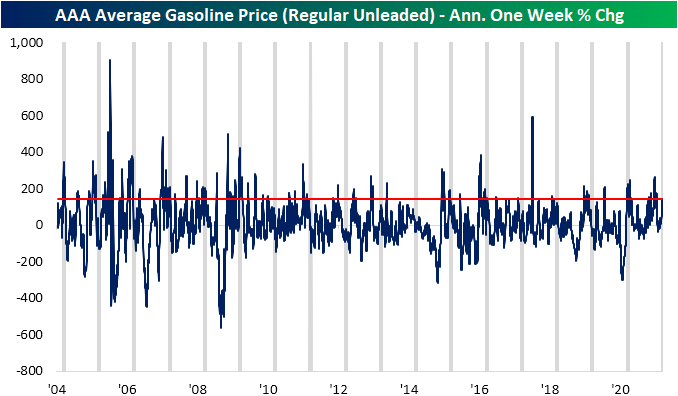 As previously mentioned, the Colonial Pipeline is a major piece of energy infrastructure on the East Coast. In other words, while the national average of gas has risen sharply as a result of the event, the largest increases have been concentrated to a specific region of the country: the Southeast. In the heatmap below, states colored with deeper shades of green indicate those where the average price of a gallon of gas have risen the most in the past week.

Places like Georgia, Alabama, and the Carolinas (all of which the Colonial Pipeline pass through) have seen their states’ average gas prices rise in the mid-to-high single-digit percentage range over the past week; the highest increases in the country. Moving further north along the Eastern Seaboard, the increases in gas prices become less steep but still notable.  The vast majority of states in the Midwest, New England, and Mid Atlantic have seen prices rise only in the 2 to 3% range. The same applies to the states in the heartland. But moving further out West, price appreciation has been even smaller. Most Western states have seen the average gas price rise in the 1% range, which is exactly what you would expect to see at this time of year. 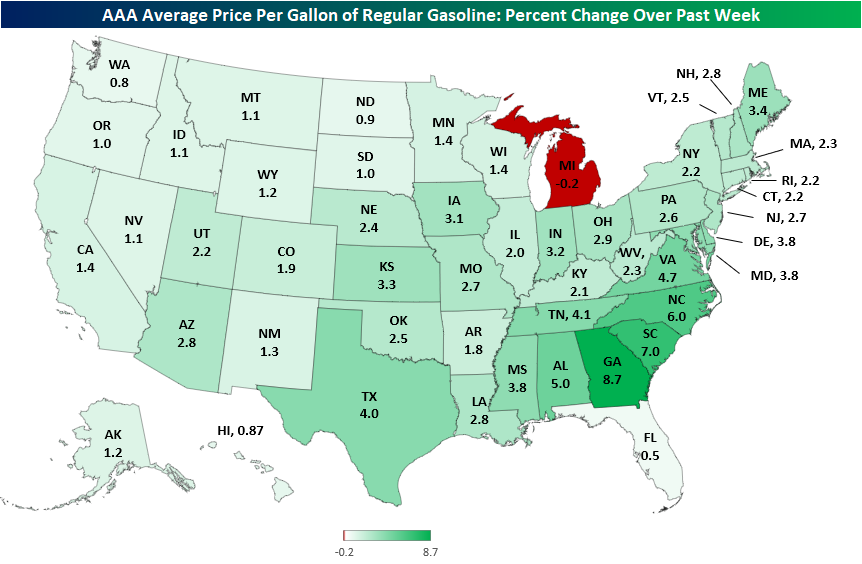 Looking at price changes in the past day alone, it is largely the same story.  Much of the South has seen prices rise the most rapidly while prices further North have not risen by nearly as much.  In fact, states like Missouri, Indiana, and Michigan actually saw prices move slightly lower.  Again, the West also has seen prices modestly higher. 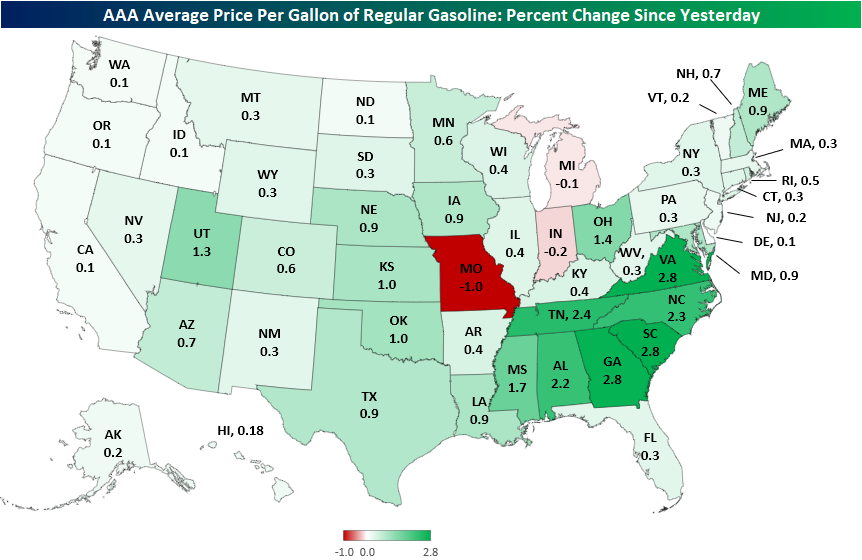 Without diminishing any of the effects that the shock of a sharp uptick in prices could have, we would also note that even after the significant appreciation, gas prices in the South remain some of the cheapest in the country.   California and other West coast states still have the highest prices per gallon in the country while places like Louisiana and Mississippi have the cheapest.  Click here to view Bespoke’s premium membership options for our best research available. 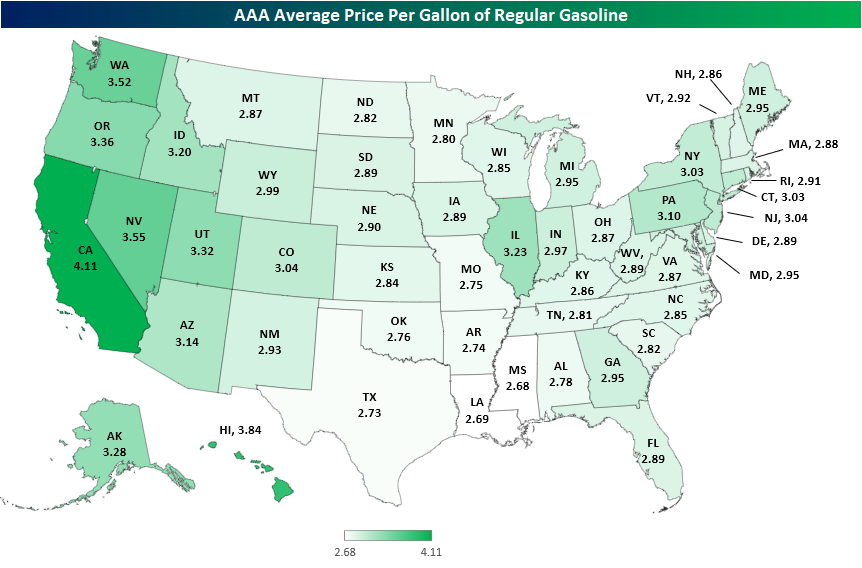