While the surge in oil prices today will likely have some impact on gas prices in the days ahead, recent trends in prices at the pump have really done an about-face.  After a record YTD surge that took prices as high as $2.88 per gallon as of March 19th, the national average price of a gallon of gas has dropped to $2.86 according to AAA.  A two-cent decline in the price of a gallon of gas may not sound like much, but for this time of year, it’s extremely uncommon for prices to decline.  Since 2005, prices have only declined in the period from 3/19 through 4/14 three times in 16 years.

To further illustrate, the chart below compares the change in average gas prices this year to a composite of every year since 2005.  While it’s typical for gas prices to rise at this time of year, the surge we have seen in 2021 has been much larger than average.  However, whereas prices typically continue to rise right up through late May, this year’s increase in prices stalled out nearly a month ago. 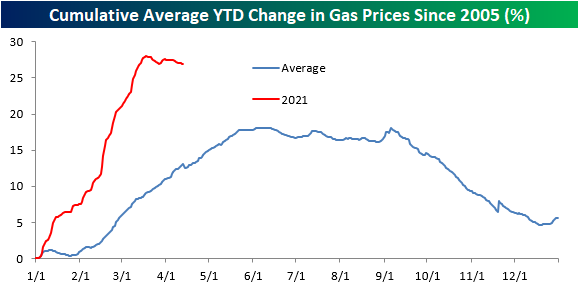 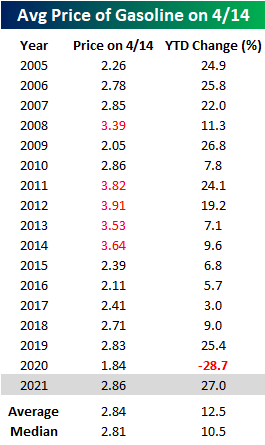 On a y/y basis, prices have also seen a major surge. At current levels, the national average price of a gallon of gas is up over 55% in the last year, and if prices simply stay at their current levels between now and the end of April, the y/y change would top out at 61.9%.  While still slightly less than a record y/y change, it would still be pretty darn close. Start a two-week free trial to Bespoke Institutional to access all of our analysis and market commentary. 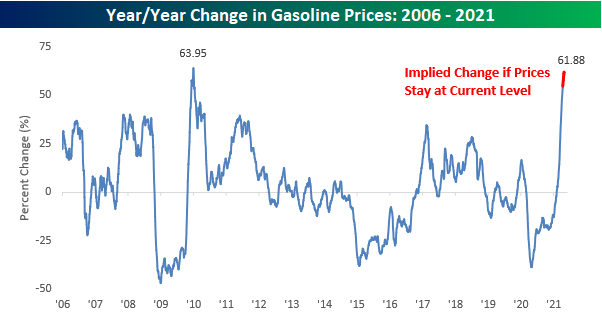