If you’re planning to drive anywhere this weekend, you may need a wheelbarrow to carry the cash you’re going to need to fill up.  According to AAA, based on the national average, a gallon of gas will set you back $3.184.   Around the country, though, prices vary widely.  In California, where prices are the highest (even higher than Hawaii), the average price of a gallon of gas is $4.40 ($4.71) if you fill up with premium).  Mississippi wins the title of lowest average price at just $2.79 per gallon and is one of just 15 states where you can still get a gallon of gas for less than $3. While prices may be high heading into Labor Day weekend, the fact that it still costs less than 13 cents to drive a mile isn’t all that bad (based on the average fuel efficiency of 24.9 miles per gallon), and it’s much cheaper than most other areas of the world.

That being said, prices at the pump are still high whether you look at things from an absolute or relative basis.  For the current day of the year, the national average of $3.18 is higher than at this point in any other year since 2014, and forty cents above the median level for this time of year.  On a YTD basis, going back to 2005, this year’s increase is the third largest of any other years besides 2009 and 2005.  At 41.3%, prices are up by more than double their average YTD increase through 9/3. 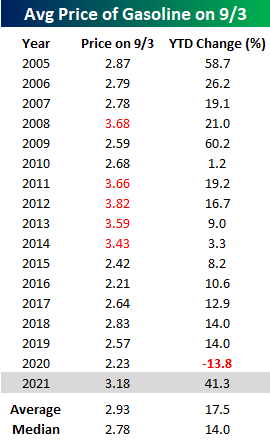 On a y/y basis, average gas prices are also up over 40%.  For just about any other time that rate of increase would be extreme, but given the y/y increase just hit a record high of 63.98% in May it doesn’t seem that bad. 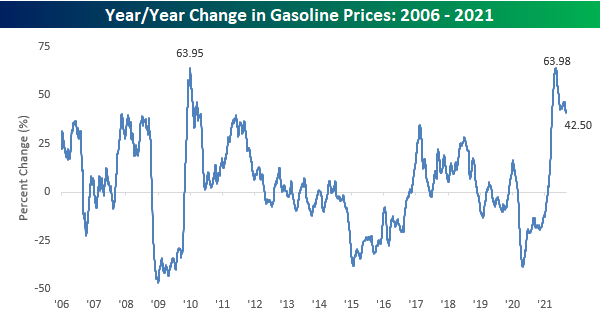 Now that we’ve established that gas prices are high, it is worth pointing out that despite the high levels, prices have loosely followed the seasonal trend.  The chart below compares gas prices this year to a composite of the average YTD increase for every day of the year going back to 2005.  Through the end of May, prices were already up 35% YTD, and in the three months since then, prices have still increased, but at a much slower pace.  Historically, prices tend to rise through Memorial Day and then level off through Labor Day before steadily declining to close out the year.  Like the annual composite, prices dipped into the end of August this year and have spiked into Labor Day weekend.  With respect to this year, increases have been exaggerated due to Hurricane Ida, but if history is any guide, drivers should start to see some relief in the final four months of the year. Click here to view Bespoke’s premium membership options.