Historically, the strongest part of the year for gas prices has been the summer. From the start of the year through the late spring, prices tend to rise, flattening out over the summer months, then declining from Labor Day into year’s end.  We’re now about a month beyond Labor Day and 2021 gas prices are bucking that seasonal trend a bit.  AAA’s national average for a gallon of regular gas just hit a new high for the year at $3.22. That is up 42.9% since the start of the year which compares to an average 14% YTD gain at this point of the year from 2005 through 2020.  The only two years with larger YTD gains were 2005 and 2009.

The recent move higher in gas prices again goes against the historical seasonal average since 2005, but it is not exactly unheard of for prices to rise slightly from the end of August to the first week of October, and that’s even more true in recent years.  As shown in the table below, gas prices consistently fell from August 31 to October 6th from the mid-2000s to 2015, but since then it has not been uncommon to see prices rise in that time frame.  In fact, this year’s 1.48% gain since the end of August is middling versus well over 2% gains in 2018 and 2019. 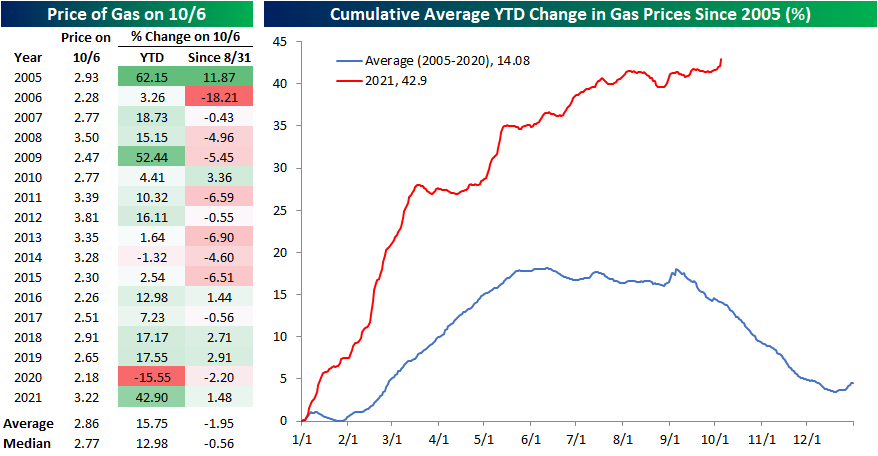 Regardless of seasonal patterns, the recent increases leave the national average for a gallon of regular at the highest level since October 2014 which hurts consumers where it matters most- the wallet.  Click here to view Bespoke’s premium membership options. 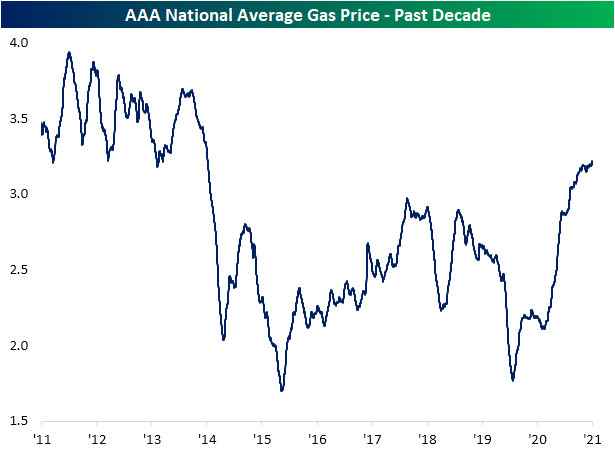