Along with just about everything else these days, prices at the pump have been surging this year.  According to AAA, the national average price of a gallon of gas currently stands at $2.88 per gallon.  To find the last time prices were this high, you have to go back to May 2019.  This year alone, gas prices have already increased 27.7%.  The table below compares the change in gas prices so far this year to the same time period in every other year since 2005, while the chart compares the trend in prices this year to a composite pattern of all other years.  At the current price level, gas prices are the highest they have been at this point in the year since 2014, and there have only been five other years where prices were higher.

What really stands out, though, is how fast prices have increased.  Prior to 2021, there wasn’t a single year since 2005 that the national average price increased by more than 20% YTD through 3/17, but this year, they’re already up 27.7%!  Based on the typical seasonal pattern, don’t expect much in the way of relief anytime soon.  Typically, prices at the pump rise right up through Memorial Day and then level off for the summer before easing in the last four months of the year.

The recent rise in gasoline prices has also been incredibly consistent.  It has now been 52 straight days that the national average price has gone without a one-day decline and represents just the fourth streak of 50 or more days since 2005.  The longest streak ended at 76 days in early 2019 (the last time prices approached $3 per gallon) while the only two other streaks were in 2007 and 2009. 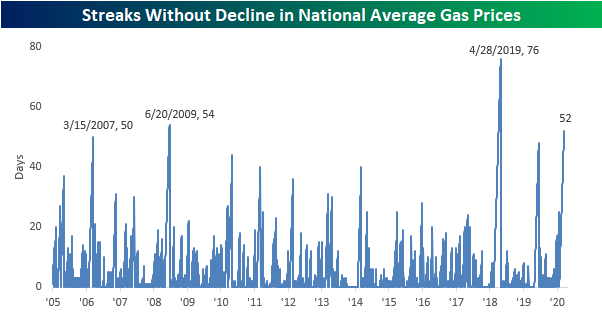 With the early stages of the COVID outbreak now a year in the rearview mirror, we’re starting to see some crazy y/y moves in gas prices and these moves are only going to get more extreme as we approach the one-year anniversary of crude oil prices going negative.  The average price of a gallon of gas is up 28.3% versus a year ago which is already the highest y/y pace in four years.  In the weeks ahead, though, this y/y rate is almost guaranteed to increase.  As mentioned above, gas prices typically rise between now and the end of April, and in the 16 years since 2005, there have only been three years where prices declined between now and 4/30. Not only that, but during the period from 3/17 through 4/30 last year, gas prices decline more than 20%.  Therefore, even if prices stay flat between now and 4/30, the y/y increase will surge to 62.8%, which would be just shy of a record y/y pace.  The FOMC may be pulling out all the stops to get inflation higher, but unless you own a gas station, these trends in gas prices are painful.  Start a two-week free trial to Bespoke Institutional for full access to all of our research and market commentary. 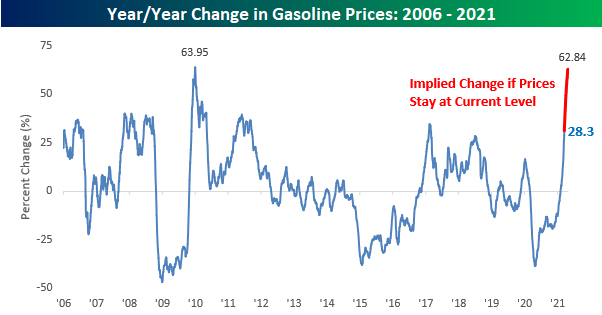