While last week’s surge in oil prices after the attacks on Saudi Arabian oil facilities stoked concerns of a spike higher in gas prices, the rally has already started to fizzle out. As of yesterday, the national average price of a gallon of gas was $2.66, and while that’s ten cents higher than where prices were before the attacks, we’ve already started to see prices ease for three days in a row now.  With a YTD gain of 17.9%, this year’s move has now been slightly above the historical average (17.3%) dating back to 2005 and well above the median of 12.6%.

The chart to the right compares the change in gas prices so far this year to a composite of the YTD change for all years since 2005.  Prior to the attacks in Saudi Arabia, prices were trending modestly below the historical average, but now prices are right in line with the historical average.  If the pattern continues to hold, we should see prices resume their downward trend from now until year-end.

Given the seasonal nature of gas prices, where they are now versus six months ago probably isn’t as important as the year/year change.  If prices are lower now than they were at this time last year, consumers will feel more flush while higher prices may crowd out spending in other areas.  After about two years where gas prices were consistently higher on a y/y basis, we’ve recently seen a trend where prices have been down modestly.  While the decline probably hasn’t been big enough to have a big impact, at the margin, consumers have seen a bit of a tailwind from lower prices.  Start a two-week free trial to receive our market research and access our interactive tools. 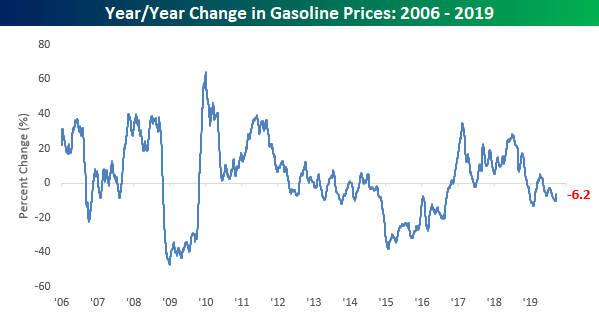