This week the Investment Company Institute reported fund flows across ETFs and mutual funds for the week ending April 22nd. Below, we summarize flows across a range of periods as well as how those numbers stack up to historical ranges since 2013. The most recent week saw massive flows into commodity ETFs as vehicles like USO saw massive interest from retail investors. Total inflows to commodity ETFs totaled $14bn in the four weeks ended April 22. The current week is a record result. For equities, the week was mostly weak with $9.5bn in overall outflows mostly thanks to $7.9bn in global equity outflows. Bond funds continued to reverse their extreme outflows from March with $9.8bn in inflows across ETF and mutual funds.

Mid-April saw the aggregate fund universe draw inflows for two straight weeks after massive outflows in March. As we discussed above, the biggest cause for outflows was bond markets, with $306bn leaving the combined ETF and mutual fund universe in six weeks from March 4th to March 8th. Equity flows have been much more muted, as shown in the second chart below.  Gain access to Bespoke’s most actionable investment research with a two-week free trial to Bespoke Premium. 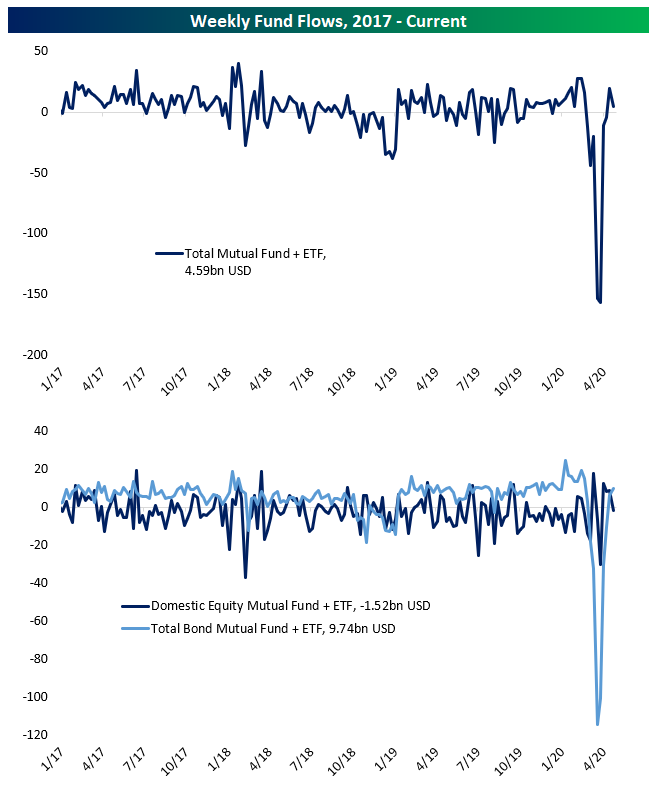