Below are the final total return performance numbers for key ETFs across asset classes in 2019.  For each ETF, we also include its performance in Q4 and December.

Everywhere you look across the equity landscape, there were big winners in 2019, but the weakest area of the market was the Energy sector ETF (XLE).  Even still, XLE managed to put up double-digit percentage gains on the year at +11.74%.

In the commodities space, we saw oil gain 32.61% in 2019, which actually bested the gain for the S&P 500.  Gold (GLD) and silver (SLV) both put in solid gains in the mid-teens, while the perpetually losing natural gas ETF (UNG) was the only ticker in the matrix that fell across all three time frames (December, Q4, and full year).

Looking at fixed income, the aggregate bond market ETFs (AGG and BND) posted total returns of 8%+, while the 20+ Year Treasury ETF (TLT) gained 14% on the year.  Q4 and December were tough for fixed income, however, as rates moved higher.  Join Bespoke Premium with a two-week free trial for our 2020 outlook and more. 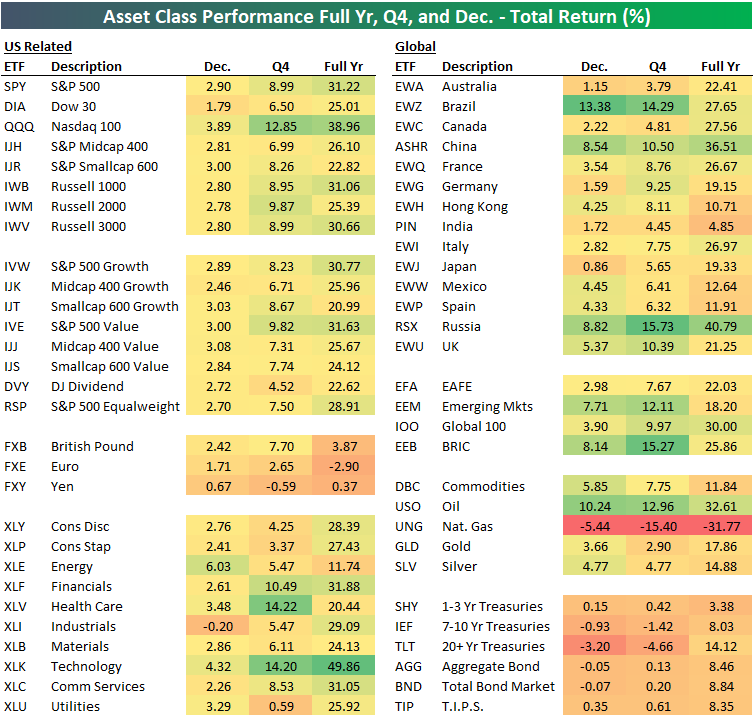