Fourth Largest Gap Down Ever for Crude Oil ETF (USO)

Crude oil is the story of the day today. The cause for recent declines in crude have been a result of surging supplies on flat-lining demand while people around the globe follow stay at home orders. Front month futures (May 2020) facing expiration tomorrow are down over 40% while contracts further out on the curve are also down substantially though by not nearly as much. That brings front month crude oil to around the same levels as early 1999/late 1998 and the summer of 1986.

The United States Oil Fund (USO) has about 80% of its portfolio in what will be the new current front month futures (June 2020) after rolling a couple of weeks ago with the rest of the portfolio in the second month contracts (July 2020). Despite record inflows, the fund will face headwinds going forward as a result of the costs of rolling with crude oil in the steepest contango on record as we discussed in our Morning Lineup. That also comes as today’s declines brought USO to its lowest levels on record, breaching support from late March. 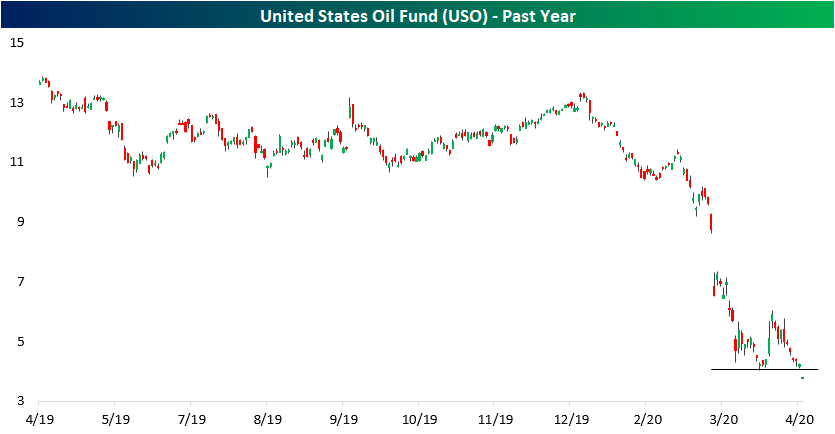 Going back to the USO’s inception in 2006, its gap down of 10.93% at today’s open was the fourth largest opening gap down on record. As for the three larger gaps, those have all come since the beginning of March as shown in the chart and inlaid chart below.  Prior to the current ongoing saga of dramatic price swings, there was never a double-digit gap down with the next largest being a 9.24% decline on October 24th of 2008.  Over the past three times that USO gapped down 10% or more since March, the ETF averaged a 4% decline from open to close.  Start a two-week free trial to Bespoke Institutional to access our Morning Lineup and much more. 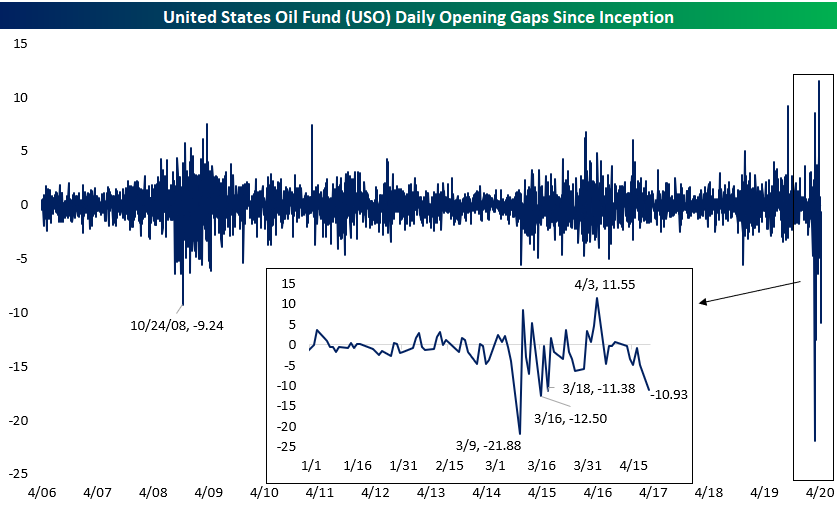