Foreclosures and Delinquencies Down

In an earlier post, we noted how data from the Mortgage Banker’s Association has shown that although purchase activity has been on the decline in recent weeks, activity remains at strong levels.  Elsewhere in MBA data released this week, yesterday the group put out delinquency and foreclosure figures for the third quarter.  Delinquencies improved in the third quarter with the rate falling from a nearly decade high of 8.22% to 7.65%.  That decline is consistent with the delinquency rate from Black Knight which showed delinquencies fall from 6.88% in August to 6.66% in September.  The MBA also released their quarterly reading on foreclosures.  As we have noted in the past with the equivalent Black Knight data, moratoriums and other freezes have led the foreclosure rate to continue to fall to fresh lows. The MBA’s reading, which goes further back, fell to 0.59% in the third quarter; the lowest reading since 1982.

Additionally, the MBA breaks down their data by region.  The Northeast and the South face the highest share of delinquencies at 8.61% and 8.59%, respectively.  The rates for the North Central and West are a couple of percentage points lower at 6.82% and 6.1%, respectively.  Regardless of these differences across regions, the picture is generally the same as the national rate: delinquencies have ticked lower but remain at some of the highest levels of the past several years.  Click here to view Bespoke’s premium membership options for our best research available. 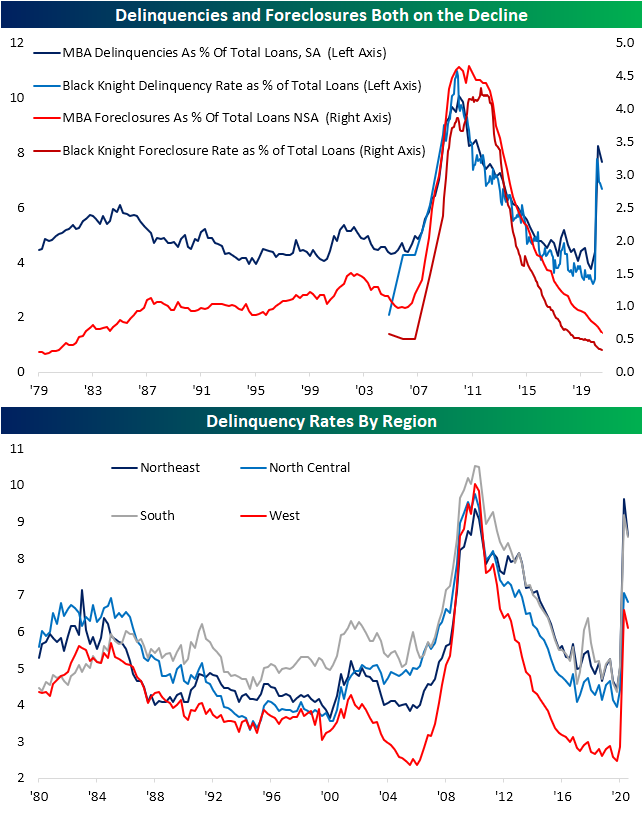