While Ford used to release vehicle sales on a monthly basis, that changed in 2018 when the company began to switch to a quarterly reporting period.  Whenever companies make the decision to give less rather than more performance data, it usually comes at a time when the numbers are getting worse rather than better.  After all, have you ever heard of a company choosing to give less information when their business is booming?  With that in mind, it shouldn’t come as much of a surprise that sales figures for Ford vehicles have been weakening. This morning, Ford released sales figures for the third quarter, and overall sales fell 5.6% relative to the third quarter of 2018 and are down 3.9% on a YTD basis relative to last year.

On these pages, we tend to focus on sales of Ford F-Series trucks.  The reason for this is that sales of pickup trucks are often a sign of strength or weakness in the small business and construction sectors as these types of businesses are the most common users of these vehicles. Similar to the overall sales figures from Ford, sales of F-Series trucks have also been weak which suggests a more sluggish environment for small businesses.  In the third quarter, total sales came in at 214,176 which was a full 6% below the same quarter last year.  That may not sound like much, but the last time there was this large of a decline in Q3 sales on a y/y basis was in 2008. 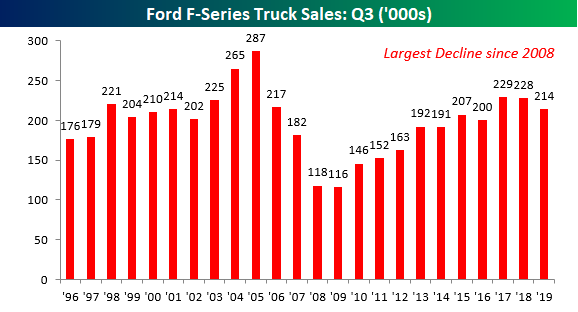 Year to date, total sales of Ford F-Series trucks are down 2.4%, falling from 679K down to 662.6K.  Here again, that may not sound like a whole lot, but it is only the second time since 2009 where the y/y sales pace was negative and this year’s decline is the largest since 2009. Start a two-week free trial to Bespoke Institutional for full access to our research and market analysis. 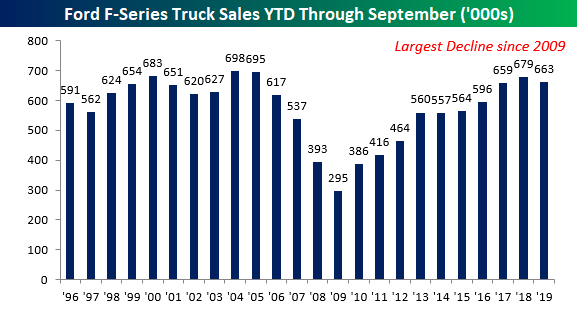